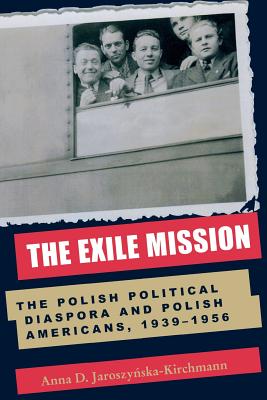 At midcentury, two distinct Polish immigrant groups—those Polish Americans who were descendants of economic immigrants from the turn of the twentieth century and the Polish political refugees who chose exile after World War II and the communist takeover in Poland—faced an uneasy challenge to reconcile their concepts of responsibility toward the homeland.

The new arrivals did not consider themselves simply as immigrants, but rather as members of the special category of political refugees. They defined their identity within the framework of the exile mission, an unwritten set of beliefs, goals, and responsibilities, placing patriotic work for Poland at the center of Polish immigrant duties.

In The Exile Mission, an intriguing look at the interplay between the established Polish community and the refugee community, Anna Jaroszynska–Kirchmann presents a tale of Polish Americans and Polish refugees who, like postwar Polish exile communities all over the world, worked out their own ways to implement the mission's main goals. Between the outbreak of World War II and 1956, as Professor Jaroszynska–Kirchmann demonstrates, the exile mission in its most intense form remained at the core of relationships between these two groups.

The Exile Mission is a compelling analysis of the vigorous debate about ethnic identity and immigrant responsibility toward the homeland. It is the first full–length examination of the construction and impact of the exile mission on the interactions between political refugees and established ethnic communities.

An associate professor of history at Eastern Connecticut State University, Anna D. Jaroszynska-Kirchmann is the author of a number of articles on the history of the postwar Polish political diaspora, two of which received the Polish American Historical Association's Swastek Award in 2002 and 2003. The Exile Mission manuscript won the Kulczycki prize.

“The Exile Mission makes it clear that Polonia is far from being a homogeneous group, and instead is quite diverse and complex. How it became so, during the terribly tragic conflicts and upheavals within our civilization between 1939 and 1956, is the focus of this study.”
The Polish Review
or support indie stores by buying on
Copyright © 2020 American Booksellers Association