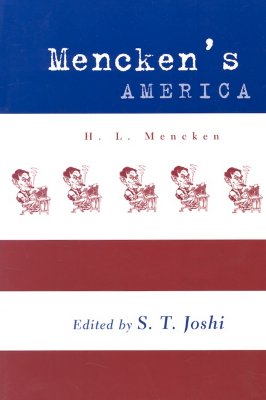 Long famous as a political, social, and cultural gadfly, journalist and essayist H. L. Mencken was unafraid to speak his mind on controversial topics and to express his views in a deliberately provocative manner.

Mencken was prolific; much of his best work lies buried in the newspapers and magazines in which it originally appeared. Mencken’s America is a sampling of this uncollected work, arranged to present the wide-ranging treatise on American culture that Mencken himself never wrote.

The core of the book is a series of six articles on “The American” published in the Smart Set in 1913-14. Never before reprinted, they embody the essence of Mencken’s views on the deficiencies of his countrymen.

What was the problem with America? For Mencken, it could be summed up in one word: Puritanism. Puritanism accounted for much that was wrong with American culture: the prevalence of “militant morality” represented by Prohibition, by campaigns against prostitution, and by religious fundamentalism. American hostility toward the fine arts led to furious attempts to suppress any work of art that was thought to contravene conventional morality-attempts that Mencken chronicles with impressive scholarship in the essay “Puritanism as a Literary Force.”

Mencken reserved his greatest scorn for American political institutions. Opposed to the very principle of democracy and universal suffrage, he maintained that, in the absence of an educated electorate, all politicians are compelled to become demagogues.

Bracing, infuriating, and pungent, H. L. Mencken’s writings retain their relevance even after the passage of nearly a hundred years, cogently discussing issues with which Americans of the twenty-first century are still wrestling. Sagaciously edited by S. T. Joshi, one of the country’s foremost Mencken scholars, Mencken’s America is a superb example of America’s turning the looking glass on itself.

S. T. Joshi has edited several collections of Mencken’s writings, including H. L. Mencken on American Literature, Mencken’s America, and Mencken on Mencken: A New Collection of Autobiographical Writings. He is also an authority on literature of the supernatural and author of The Weird Tale, Unutterable Horror: A History of Supernatural Fiction, and other critical and biographical studies.