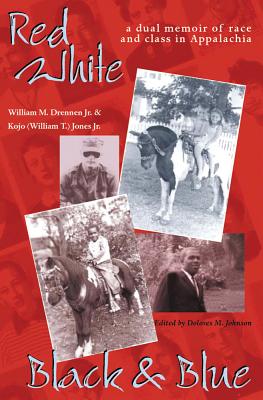 "Red, White, Black, and Blue" began as a collaborative memoir by William M. Bill Drennen, a European American, and Kojo (William T.) Jones, an African American. These Appalachian men grew up in the South Hills section of Charleston, West Virginia. As boys they played on the same Little League baseball team and experienced just one year together as schoolmates after the all-white Thomas Jefferson Junior High School was desegregated in 1955. After that, class, race, and choice separated their life experiences for forty-five years.
In 1992 both had returned to Charleston from lives mostly lived elsewhere. They decided to work together on a memoir of growing up through the trauma of desegregation. Their aim was to foster understanding between their distinct cultures for themselves and for their own and future generations. Dolores Johnson, in editing the two texts, observed two very different modes of expression: Bill Drennen's narrative is threaded with references that connote wealth, status, and personal privilege; Kojo Jones's memoir is interwoven with African American signification, protest, and moral outrage.
The stories of their Appalachian upbringing in homes less than a mile apart are anecdotal in nature, but their diverse uses of the English language as they endeavor to communicate shared memories and common meanings reveal significant cultural connotations that transform standard American English into two different languages, rendering interracial communication problematic. Dr. Johnson's analysis is to the point.
"Red, White, Black, and Blue" is a groundbreaking approach to studying not only cultural linguistics but also the cultural heritage of a historic time and place in America. It gives witness to the issues of race and class inherent in the way we write, speak, and think.

A professor of English at Marshall University, Dolores Johnson is the author of "Not a Story to Be Told: Discourse, Race, and Myth in Huntington, West Virginia Newspapers, 1872 and 1972" and articles on teaching strategies for the multicultural classroom.
Loading...
or
Not Currently Available for Direct Purchase