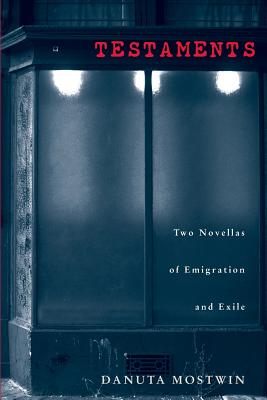 Polish émigrés have written poignantly about the pain of exile in letters, diaries, and essays; others, more recently, have recreated Polish-American communities in works of fiction. But it is Danuta Mostwin’s fiction, until now unavailable in English translation, that bridges the divide between Poland and America, exile and emigration.

Mostwin and her husband survived the ravages of World War II, traveled to Britain, and then emigrated to the United States. Mostwin devoted her scholarly career to the study of immigrants trapped between cultural worlds. Winner of international awards for her fiction, Danuta Mostwin here offers two novellas, translated by the late Marta Erdman, which are the first of her works published in English in the United States.

Deeply melancholic and moving in its unsentimental depiction of ordinary people trying to make sense of their uprooted lives, Testaments presents two powerful vignettes of life in immigrant America, The Last Will of Blaise Twardowski and Jocasta. This timely publication provides an introduction to Mostwin’s work that will ensure that she is recognized as the creator of one of the most nuanced and deeply moving pictures of emigration and exile in Polish-American literature.

“Danuta Mostwin's collected works are at last coming out in Poland. That this event coincides with the publication of the present book signifies a belated turning point in this outstanding writer's voyage between the old and the new worlds, and in time zones in which she continues to expand.”—From the introduction by Joanna Rostropowicz Clark

“Mostwin, an acclaimed sociologist, writer, and political emigrée herself, specializes in the study of Polish immigrant families in the United States. Her fiction captures the psychological changes experienced by Polish immigrants, traces circumstances that shaped their lives, and offers philosophical reflections on their existence.”—Slavic and East European Journal

Danuta Mostwin emigrated to America in 1951. Mostwin has won recognition for her fiction, published in London, Paris, and Warsaw, and for her research on the process of immigration adjustment. Her most acclaimed works have been her novel Ameryko! Ameryko! and her seven-volume chronicle of the drama of the Polish Intelligentsia from 1863 to the end of World War II. She lives in Baltimore.