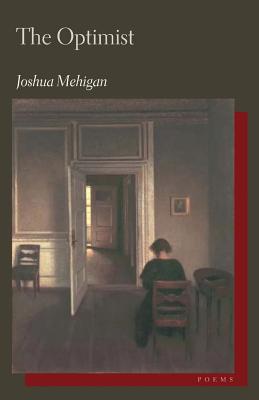 In Joshua Mehigan’s award-winning poetry, one encounters a lucid, resolute vision driven by an amazing facility with the metrical line. Most of the poems in The Optimist unapologetically employ traditional poetic technique, and, in each of these, Mehigan stretches the fabric of living language over a framework of regular meter to produce a compelling sonic counterpoint.

The Optimist stares at contemporary darkness visible, a darkly lit tableau that erases the boundary between the world and the perceiving self. Whether narrative or lyric, dramatic or satirical, Mehigan’s poems explore death, desire, and change with a mixture of reason and compassion.

“The world is given its due in these poems, but its due is the subjective voice making ‘objective’ reality into the reality of art. To do this Mehigan accesses a tradition of voices—the echoes in The Optimist are, to name a few, of Frost, Robinson, Kees, and Justice; and more in terms of point of view, Bishop and Jarrell—to form with great integrity his own. It isn’t that Mehigan is concerned more with what’s outside himself than inside; nor merely that he travels the highway between the two with such humility and grace. It’s also that these voices, this great tradition, infuses his line with what the best verse, metrical or free, must have: wonder.”

“Terse, tightly wound, as swift and barbed as arrows, this collection of fifty poems hits cleanly and hard.”—ForeWord Reviews

“This book is a remarkable achievement.”—John Hollander

“Something of the energy, the savagery and emotional fierceness of Robert Lowell’s early poems are to be found in this impressive book by Joshua Mehigan. These poems are often wound tight as spring, and are concentrations of violent feelings and visions of cruelty, yet uttered in a language quietly brilliant, as well as undeniably powerful.”—Anthony Hecht

“The Optimist, by Joshua Mehigan, is remarkable for its mastery of form and of tone. Mr. Mehigan is Frost-like in the way he plays speech rhythms against the patters of verse, creating a tense, deceptively simple music….”—Adam Kirsch, New York Sun

“One of the major pleasures of reading this book is becoming absorbed in Mehigan’s mastery of formal craft…. In the best possible way, he shows us exactly what we need to see or know, and nothing more. In my opinion, this is a sign of an incredibly promising writer, one who knows that ‘wisdom lies…in what remains unsaid.‘“—Mid-American Review

There is more insight into domestic grief in these and other poems in The Optimist than in a dozen louder, more overtly confessional books. And that sense of insight born from experience is what makes Mehigan’s work so moving and impressive. Few American poets, old or young, seem to know so much.”—Contemporary Poetry Review

Joshua Mehigan was born in upstate New York in 1969. Since 1993 he has lived in New York City and worked as an editor and English teacher. Published in many journals, including the Chattahoochee Review, Dogwood, The Formalist, Pequod, Ploughshares, Poetry, The Sewanee Review, and Verse, his poems and translations are also forthcoming in anthologies from Word Press and Zoo Press. His poems have won the Dogwood Poetry Contest and been nominated for a Pushcart Prize.