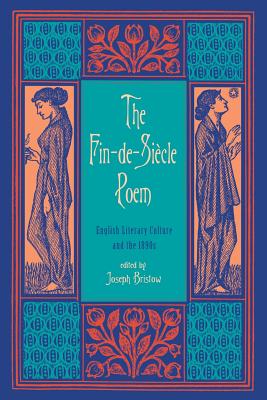 English Literary Culture and the 1890s

Featuring innovative research by emergent and established scholars, The Fin-de-Siecle Poem throws new light on the remarkable diversity of poetry produced at the close of the nineteenth century in England. Opening with a detailed preface that shows why literary historians have frequently underrated fin-de-siecle poetry, the collection explains how a strikingly rich body of lyrical and narrative poems anticipated many of the developments traditionally attributed to Modernism. Each chapter in turn provides insights into the ways in which late-nineteenth-century poets represented their experiences of the city, their attitudes toward sexuality, their responses to empire, and their interest in religious belief.

The Fin-de-Siecle Poem brings together innovative research on poetry that has been typecast as the attenuated Victorianism that was rejected by Modernism. The contributors underscore the remarkable innovations made in English poetry of the 1880s and 1890s and show how woman poets stood shoulder-to-shoulder with their better-known male contemporaries.Joseph Bristow is professor of English at the University of California, Los Angeles, where he edits the journal Nineteenth-Century Literature. His recent books include The Cambridge Companion to Victorian Poetry, Oscar Wilde: Contextual Conditions, and the variorum edition of Oscar Wilde's The Picture of Dorian Gray.

Praise For The Fin-de-Siecle Poem: English Literary Culture and the 1890s…

“This collection is a significant contribution to the scholarship on late Victorian literature. It will also allow scholars of modernist literature to reassess the modernity of the fin-de-siècle in Britain.”
— Mary Ellis Gibson, author of Epic Reinvented: Ezra Pound and the Victorian

“This book is a masterful collection of articles that seeks to freshen critical interest in this strange transition period between the apparent softness of Victorian poetry and deliberate hardness of the modernist poetry waiting around the century’s corner.”
— Rocky Mountain Review of Language & Literature

“The volume is a major contribution to the study of late-Victorian poetics. Bristow should be commended for inspiring and assembling it and Ohio should be recognised for publishing an anthology of higher quality than more established presses.”
— Victorian Studies

“The Fin-de-Siécle Poem: English Literary Culture and the 1890s is one of the most important books in the field of fin-de-siécle poetry of the last twenty years. Erudite, bold, and impressive, this collection offers new ways of reading the poetry of the 1890s and demonstrates just how rewarding those new ideas can be.”
— Journal of Pre-Raphaelite Studies

Joseph Bristow is a professor of English at the University of California, Los Angeles, where he edited the journal Nineteenth-Century Literature from 1997 to 2007. His recent books include The Fin-de-Siècle Poem, The Cambridge Companion to Victorian Poetry, Oscar Wilde: Contextual Conditions, and the variorum edition of Oscar Wilde’s The Picture of Dorian Gray.
Loading...
or support indie stores by buying on