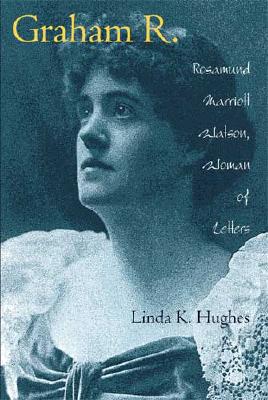 Rosamund Marriott Watson was a gifted poet, an erudite literary and art critic, and a daring beauty whose life illuminates fin-de-siecle London and the way in which literary reputations are made and lost. A participant in aestheticism and decadence, she wrote six volumes of poems noted for their subtle cadence, diction, and uncanny effects. Linda K. Hughes unfolds a complex life in "Graham R.: Rosamund Marriott Watson, Woman of Letters," tracing the poet's development from accomplished ballads and sonnets, to avant-garde urban impressionism and New Woman poetry, to her anticipation of literary modernism.
Despite an early first divorce, she won fame writing under a pseudonym, Graham R. Tomson. The influential Andrew Lang announced the arrival of a new poet he assumed to be a man. She was soon hosting a salon attended by Lang, Oscar Wilde, and other 1890s notables. Publishing to widespread praise as Graham R., she exemplified the complex cultural politics of her era. A woman with a man's name and a scandalous past, she was also a graceful beauty who captivated Thomas Hardy and left an impression on his work. At the height of her success she fell in love with writer H. B. Marriott Watson and dared a second divorce.
"Graham R." combines the stories of a gifted poet, of London literary networks in the 1890s, and of a bold woman whose achievements and scandals turned on her unusual history of marriage and divorce. Her literary history and her uncommon experience reveal the limits and opportunities faced by an unconventional, ambitious, and talented woman at the turn of the century.