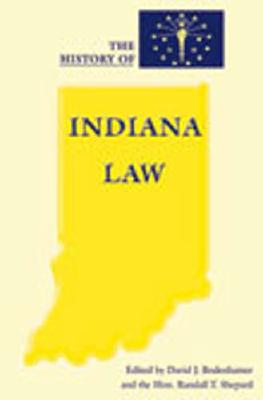 The History of Indiana Law (Law Society & Politics in the Midwest)

Long regarded as a center for middle-American values, Indiana is also a cultural crossroads that has produced a rich and complex legal and constitutional heritage. The History of Indiana Law traces this history through a series of expert articles by identifying the themes that mark the state’s legal development and establish its place within the broader context of the Midwest and nation.

The History of Indiana Law explores the ways in which the state’s legal culture responded to—and at times resisted—the influence of national legal developments, including the tortured history of race relations in Indiana. Legal issues addressed by the contributors include the Indiana constitutional tradition, civil liberties, race, women’s rights, family law, welfare and the poor, education, crime and punishment, juvenile justice, the role of courts and judiciary, and landmark cases. The essays describe how Indiana law has adapted to the needs of an increasingly complex society.

The History of Indiana Law is an indispensable reference and invaluable first source to learn about law and society in Indiana during almost two centuries of statehood.

“Every state should have a book like this, and the authors and editors deserve a great deal of credit for adding this one to the four existing volumes in the Law, Society and Politics in the Midwest series.”
— Elizabeth Brand Monroe, Indiana Magazine of History

“Hoosier lawyers will covet this book because it amounts to a mini-encyclopedia that expertly lays out the basic facts and patterns of the state’s legal history. Historians may hope it does even more. If readers come to consider the state and its system of justice as historically constructed … then The History of Indiana’s Law will have performed an immensely valuable service to the state as well as to its historians and lawyers.”
— The American Journal of Legal History

David J. Bodenhamer is a professor of history and the executive director of The Polis Center at Indiana University–Purdue University Indianapolis. He is the author or editor of six books, including Fair Trial: Rights of the Accused in American History and The Bill of Rights in Modern America: After 200 Years (with James W. Ely Jr.).

Randall T. Shepard, an Evansville native, has become one of the most respected jurists in the country. Shepard was appointed to the Supreme Court of Indiana in 1985 and was later promoted to chief justice of the court.
Loading...
or
Not Currently Available for Direct Purchase