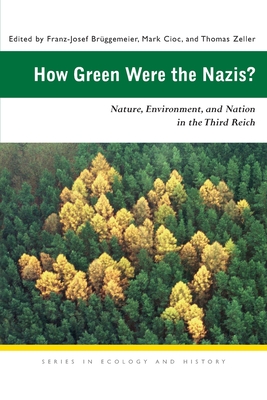 How Green Were the Nazis?

Nature, Environment, and Nation in the Third Reich (Ecology & History)

The Nazis created nature preserves, championed sustainable forestry, curbed air pollution, and designed the autobahn highway network as a way of bringing Germans closer to nature. How Green Were the Nazis?: Nature, Environment, and Nation in the Third Reich is the first book to examine the Third Reich's environmental policies and to offer an in-depth exploration of the intersections between brown ideologies and green practices.

Environmentalists and conservationists in Germany welcomed the rise of the Nazi regime with open arms and hoped that it would bring about legal and institutional changes. However, environmentalists soon realized that the rhetorical attention they received from the regime did not always translate into action. By the late 1930s, nature and the environment had become less pressing concerns as Nazi Germany prepared for and executed a global conflagration.

Based on prodigious archival research, and written by some of the most important scholars in the field of twentieth-century German history, How Green Were the Nazis? examines the overlap between Nazi ideology and conservationist agendas. This landmark book underscores the fact that the “green” policies of the Nazis were more than a mere episode or aberration in environmental history.


Praise For How Green Were the Nazis?: Nature, Environment, and Nation in the Third Reich (Ecology & History)…

“Perhaps one of the greatest values of this book is to underscore once again the fact that environmentalism as a political belief system has never been value-free and thus has been able to take vastly different political forms.”—Technology and Culture

“Instead of courting controversy, How Green Were the Nazis? both draws on, and contributes to, recent trends in the historiography of the Third Reich. It treats the regime not as a ‘historical aberration’ but as a barbaric mutation of modernity that displayed ‘a mixture of atavistic and avante-garde ideas’ in environmental as in other policy areas.”—Environment and History

“The environmental ideas, policies, and consequences of the Nazi regime pose controversial questions that have long begged for authoritative answers. At last, a team of highly qualified scholars has tackled these questions, with dispassionate judgment and deep research. Their assessment will stand for years to come as the fundamental work on the subject and provides a new angle of vision on 20th-century Europe’s most disruptive force.”—John McNeill, author of Something New Under the Sun: An Environmental History of the Twentieth-Century World

“An invaluable English introduction to the history of conservation in the Third Reich.”—Journal of Contemporary History

“The thesis brought forward by the editors regarding the ‘modernity’ of National Socialism is exciting.... The volume raises key questions and provides a very good basis for engaging with the history of conservation under Nazi rule.”—Historische Zeitschrift

Franz-Josef Brüggemeier is a professor of history at the University of Freiburg, Germany. He has published extensively in the field of environmental history in nineteenth- and twentieth-century Europe.

Mark Cioc is a professor of history at the University of California, Santa Cruz and the author of The Rhine: An Eco-Biography, 1815–2000. He is a coeditor of How Green Were the Nazis? Nature, Environment, and Nation in the Third Reich.

Thomas Zeller is an associate professor at the University of Maryland, where he teaches the history of technology, environmental history, and science and technology studies. He is the author of Driving Germany: The Landscape of the German Autobahn, 1930–1970 and coeditor of How Green Were the Nazis? Nature, Environment, and Nation in the Third Reich and Rivers in History: Designing and Conceiving Waterways in Europe and North America.