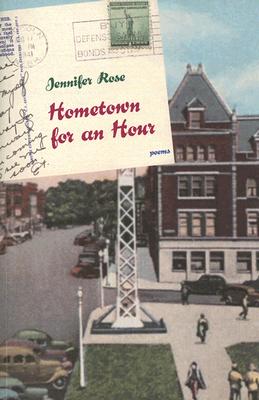 Hometown for an Hour

In her second collection of poems, Jennifer Rose writes primarily of places and displacement. Using the postcard’s conventions of brevity, immediacy, and, in some instances, humor, these poems are greetings from destinations as disparate as Cape Cod, Kentuckiana, and Croatia. Rich in imagery, deftly crafted, and imbued with a lightness of voice, these poems are also postmarked from poetry’s more familiar provinces of love, nature, and loss.

“Jennifer Rose’s ‘postcards’ arrive with news of a world receding—but for her evocative communiqués—rapidly into the past. The poems serve to fix in time her transient locales, revealing not remote tourist destinations but the very places where the poet has been most alive. Rose’s odd assortment of places, she tells us, have seduced her, just as reading her poems, with their elegant and muscular formal excellence, will most certainly seduce readers. Tempering nostalgia with wit and emotional immediacy with consummate musicianship and craft, these poems reconstruct a world that, in Rose’s fine imagining of it, becomes not only hers but ours as well.”—David Yezzi, final judge of the ninth Hollis Summers Poetry Prize

“A master of iambic speech rhythms, Rose brings a cadenced intimacy to her colloquial communiqués. Her sly wit and ear for satisfying rhymes and slant rhymes lend these poems a nimble brightness, even as they take on personal sorrow and historical tragedy.”—Women’s Review of Books

“Autobiographical elements lend tremendous emotional depth to the collection…. The power of this volume resides in small moments of perspective, revelation, and self-realization.”—The Bloomsbury Review

Jennifer Rose is the author of The Old Direction of Heaven (2000) and the recipient of awards and fellowships from the National Endowment for the Arts, Massachusetts Cultural Council, and the Poetry Society of America, among others. Her poems have appeared in Poetry, The Nation, Ploughshares, and elsewhere. She lives in Waltham, Massachusetts, and works as a city planner specializing in downtown revitalization.