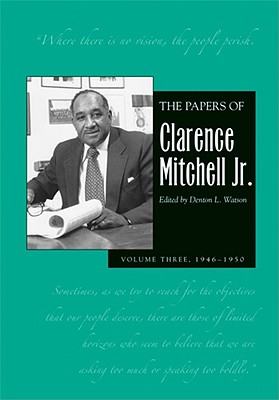 NAACP Labor Secretary and Director of the NAACP Washington Bureau, 1946-1950

Mitchell launched his career with the NAACP as a messianic advocate for the passage of civil rights laws by first creating programs for eliminating discriminatory employment practices in industry, labor unions, and the government. His subsequent focus included the NAACP's struggles to end segregation in the armed services and to eliminate Jim Crow in navy yards, schools on military posts, veterans hospitals, atomic energy installations, government restaurants, and many other federal establishments.

Those struggles are carefully documented in the monthly and annual reports of the NAACP Labor Department and the NAACP Washington Bureau from 1946 to 1950 and from 1951 to 1954, which comprise companion volumes III and IV of The Papers of Clarence Mitchell Jr. The volumes are extensively supported by other documents in the appendix from the NAACP's archives.

Volumes III and IV, furthermore, document the manner in which the NAACP utilized the newly created Leadership Conference on Civil Rights, a broad-based coalition of civil rights, civic, fraternal, labor, and religious organizations, in conjunction with the organization's branches, as its political fulcrum in implementing its developing legislative program in Congress. These volumes are an invaluable reference in tracing the NAACP's multifaceted struggle under Mitchell's leadership for passage of the civil rights laws.