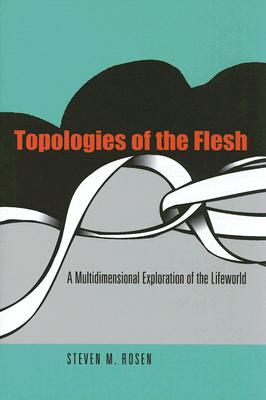 Topologies of the Flesh

A Multidimensional Exploration of the Lifeworld (Series In Continental Thought #33)

The concept of “flesh” in philosophical terms derives from the writings of Maurice Merleau-Ponty. This was the word he used to name the concrete realm of sentient bodies and life processes that has been eclipsed by the abstractions of science, technology, and modern culture. Topology, to conventional understanding, is the branch of mathematics that concerns itself with the properties of geometric figures that stay the same when the figures are stretched or deformed.

Topologies of the Flesh is an original blend of continental thought and mathematical imagination. Steven M. Rosen opens up a new area of philosophical inquiry: topological phenomenology. Through his unique application of qualitative mathematics, he extends the approaches of Merleau-Ponty and Heidegger so as to offer a detailed exploration of previously uncharted dimensions of human experience and the natural world.

Rosen's unprecedented marriage of topology and phenomenology is motivated by the desire to help overcome the pervasive dualism of contemporary philosophy and Western culture at large. To carry this to completion, he must address his own dualistic stance as author. Challenging the author's traditional posture of detachment and anonymity, Rosen makes his presence vividly felt in his final chapter, and his philosophical analysis is transformed into a living reality.

Praise For Topologies of the Flesh: A Multidimensional Exploration of the Lifeworld (Series In Continental Thought #33)…

“Topologies of the Flesh is a remarkable book, and not least from the fact that its passion could be sustained so steadily to the very end.…This is a challenging book that makes strong demands on the reader, and these demands are rewarded to an exciting degree.”—Arnold Berleant, author of The Aesthetic Field

“What Rosen calls the lifeworld has given way to the lure of technology and the pull of cyberspace, overshadowing the sensory immediacy of the natural world…Rosen proposes that our estrangement from nature entails an estrangement from ourselves and from each other.”—Scientific and Medical Network Review

“I highly recommend Topologies of the Flesh. It is a wide-ranging, richly informed, and impressively original work.”—The Journal of Mind and Behavior

Steven M. Rosen is emeritus professor of psychology at the College of Staten Island of the City University of New York. His philosophical works include Dimensions of Apeiron: A Topological Phenomenology of Space, Time, and Individuation and Science, Paradox, and the Moebius Principle: The Evolution of a “Transcultural” Approach to Wholeness.