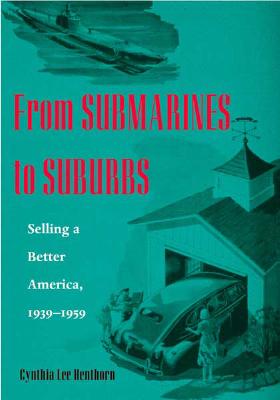 From Submarines to Suburbs

From Submarines to Suburbs surveys the development, strategy, and effect of these campaigns over a span of twenty pivotal years. Cynthia Lee Henthorn takes a close look at how pre-fabricated suburban houses, high-tech kitchens, and miracle products developed from war-related industries were promoted as the hygienic solutions for establishing this better America, one led by the captains of free enterprise.

As Henthorn demonstrates, wartime advertising and marketing strategies tying consumer prosperity to war were easily adapted in the Cold War era, when a symbiotic relationship between military standing and standards of living intensified in a culture dependent on defense spending. Were the efforts to engineer a better America successful? Using documentary evidence in the form of numerous advertisements, From Submarines to Suburbs stands as a significant contribution to understanding how today’s “better” America evolved.

Praise For From Submarines to Suburbs: Selling a Better America, 1939–1959…

“Henthorn’s well-written and extensively illustrated book about ’American commercial propaganda’ from 1939-1959 fills an important gap in the emerging historical narrative.... Drawing on a wealth of sources, including an impressive number of institutional advertisements, Henthorn explores how corporations promoted a strong consumer ethos during the war and beyond.”
— The Historian

“Readers will appreciate the numerous illustrations as well as Henthorn’s deft analysis of advertising copy and imagery. A skillful synthesis that yields new insights, From Submarines to Suburbs is a valuable contribution to both business and cultural history.”
— Business History Review

“This is a rich and sophisticated elaboration of the history of corporate restoration and should be widely read.”
— Journal of American History

“A substantial and thoroughly researched book.... Henthorn also includes sixty-nine well-chosen illustrations from newspaper and magazine advertisements and industrial sources...making the work more rewarding and accessible to a variety of readers.”
— Journalism History

“Not since Roland Marchand’s work on interwar advertising and public relations has there been such a sophisticated historical analysis of corporate rhetoric, whether verbal or visual.... From Submarines to Suburbs is a major work.”
— Technology and Culture

Cynthia Lee Henthorn has taught design history, with an emphasis on advertising and marketing trends, at art and design colleges in New York City. In her current role as a developmental editor of online courseware, she creates interactive, Web-based textbooks and assessment tools for the higher education market.
Loading...
or
Not Currently Available for Direct Purchase