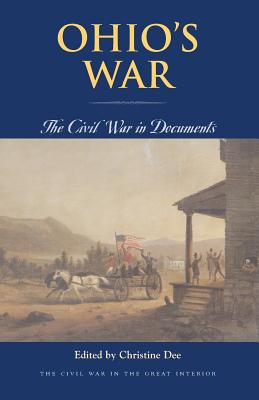 In 1860, Ohio was among the most influential states in the nation. As the third-most-populous state and the largest in the middle west, it embraced those elements that were in concert-but also at odds-in American society during the Civil War era. Ohio’s War uses documents from that vibrant and tumultuous time to reveal how Ohio’s soldiers and civilians experienced the Civil War. It examines Ohio’s role in the sectional crises of the 1850s, its contribution to the Union war effort, and the war’s impact on the state itself. In doing so, it provides insights into the war’s meaning for northern society.

Ohio’s War introduces some of those soldiers who left their farms, shops, and forges to fight for the Union. It documents the stories of Ohio’s women, who sustained households, organized relief efforts, and supported political candidates. It conveys the struggles and successes of free blacks and former slaves who claimed freedom in Ohio and the distinct wartime experiences of its immigrants. It also includes the voices of Ohioans who differed over emancipation, freedom of speech, the writ of habeas corpus, the draft, and the war’s legacy for American society.

From Ohio’s large cities to its farms and hamlets, as the documents in this volume show, the war changed minds and altered lives but left some beliefs and values untouched. Ohio’s War is a documentary history not only of the people of one state, but also of a region and a nation during the pivotal epoch of American history.

“Christine Dee’s marvelous collection of documents will captivate anyone interested in the history of Ohio and the American Civil War. Ohio’s War: The Civil War in Documents allows us to experience battle with soldiers at places such as Chancellorsville and Gettysburg. As important, we see how the Civil War mobilized, divided, traumatized, and inspired Ohio’s diverse citizens, forcing them to think hard about what was worth living for—and what was worth dying for.”—Andrew Cayton, author of Ohio: The History of a People

“A solid achievement....finely balances well-known documents and subjects with the heretofore unknown voices of ordinary Ohioans living through a momentous era.”—Northwest Ohio History

“...a chorus of diverse voices that project the complex mixture of opinions and ideas with which Buckeyes experienced the war....will be of interest to professional and amateur historians interested in the Civil War in the Ohio Valley.”—Ohio Valley History

“I would suggest this book to someone just starting on their study of the Civil War, as well as to the person who has been reading and studying the war for many years…. Professor Dee and Ohio University Press are to be commended for this excellent publication….”—Ohio’s Civil War Genealogy Journal

“Ohio’s War is a significant contribution to the study of the Civil War, providing rich context especially for readers interested in state history. The interpretive additions were very well crafted, providing a backdrop for how each source fits into the topic.”—Northern Ohio Bibliophilic Society Newsletter

Christine Dee is an Assistant Professor of History at Fitchburg State College. Her current project is a comparative study of northern Alabama and southern Ohio during the Civil War.