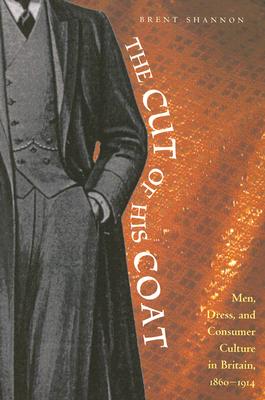 The Cut of His Coat (Paperback)

The English middle class in the late nineteenth century enjoyed an increase in the availability and variety of material goods. With that, the visual markers of class membership and manly behavior underwent a radical change. In The Cut of His Coat: Men, Dress, and Consumer Culture in Britain, 1860–1914, Brent Shannon examines familiar novels by authors such as George Eliot, Anthony Trollope, Thomas Hughes, and H. G. Wells, as well as previously unexamined etiquette manuals, period advertisements, and fashion monthlies, to trace how new ideologies emerged as mass-produced clothes, sartorial markers, and consumer culture began to change.

While Victorian literature traditionally portrayed women as having sole control of class representations through dress and manners, Shannon argues that middle-class men participated vigorously in fashion. Public displays of their newly acquired mannerisms, hairstyles, clothing, and consumer goods redefined masculinity and class status for the Victorian era and beyond.

The Cut of His Coat probes the Victorian disavowal of men's interest in fashion and shopping to recover men's significant role in the representation of class through self-presentation and consumer practices.

Brent Shannon is a visiting professor of English at Transylvania University in Lexington, Kentucky. He has published articles on nineteeth-century literature and culture in Victorian Studies and Studies in Browning and His Circle.

“Shannon’s most noteworthy achievement is his examination of the sometimes contradictory, usually tangled, process of constructing gender as it evolved during the late Victorian age, a crucial period in the history of the consumer society.”—Business History Review

“This is a unique and fascinating study, long overdue.”—Year’s Work in English Studies

“Shannon‘s The Cut of His Coat proves that there is indeed nothing new about the idea of what is now called the metrosexual.—South Atlantic Review

“Shannon's book is like one of those nifty wardrobes advertised for sale by the new department stores of the era, a polished piece of furniture with carefullly labeled chapters and neatly hanging concepts that help us organize all that information and tuck it away without getting it wrinkled.”—Ellis Hanson, author of Decadence and Catholicism

“While David Kuchta has shown how the dark suit had become the uniform of a middle class sartorially demonstrating its sobriety and superiority, Shannon demonstrates that many men nonetheless continued to follow fashion, embrace color, and express themselves through their clothing.... Attention to the dynamics of class is one of the strongest features of Shannon’s book.”—Journal of British Studies
or
Buy Here
Copyright © 2020 American Booksellers Association