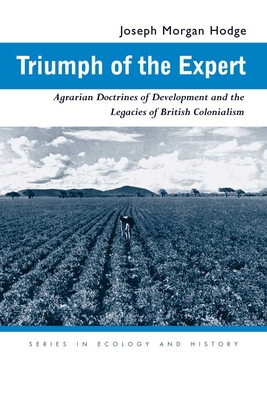 Triumph of the Expert

The most striking feature of British colonialism in the twentieth century was the confidence it expressed in the use of science and expertise, especially when joined with the new bureaucratic capacities of the state, to develop natural and human resources of the empire.

Triumph of the Expert is a history of British colonial doctrine and its contribution to the emergence of rural development and environmental policies in the late colonial and postcolonial period. Joseph Morgan Hodge examines the way that development as a framework of ideas and institutional practices emerged out of the strategic engagement between science and the state at the climax of the British Empire. Hodge looks intently at the structural constraints, bureaucratic fissures, and contradictory imperatives that beset and ultimately overwhelmed the late colonial development mission in sub-Saharan Africa, south and southeast Asia, and the Caribbean.

Triumph of the Expert seeks to understand the quandaries that led up to the important transformation in British imperial thought and practice and the intellectual and administrative legacies it left behind.

Joseph Morgan Hodge is an assistant professor of history at West Virginia University in Morgantown.
Loading...
or support indie stores by buying on