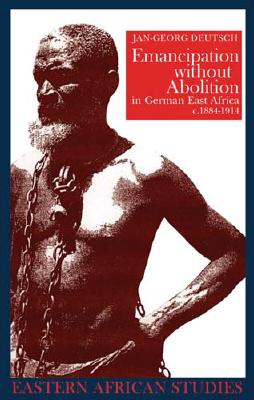 This study examines the complex history of slavery in East Africa, focusing on the area that came under German colonial rule. In contrast to the policy pursued at the time by other colonial powers in Africa, the German authorities did not legally abolish slavery in their colonial territories. However, despite government efforts to keep the institution of slavery alive, it significantly declined in Tanganyika in the period concerned. The book highlights the crucial role played by the slaves in the process of emancipation.

Author Jan-Georg Deutsch explores the rise of slavery in Tanganyika in the second half of the nineteenth century, when the region became more fully integrated into the world economy.

An analysis of German colonial policy reveals that the authorities believed that abolition should be avoided at all costs since it would undermine the power and prosperity of the local slave-owning elites whose effective collaboration was thought to be indispensable to the functioning of colonial rule.

The author demonstrates how slaves by their own initiative brought the ”evil institution“ to an end, making the best of limited choices and opportunities available to them.

The study, of interest to historians of East Africa, makes a contribution to the more general debate about the demise of slavery on the continent.

“Do we need another book on slavery and abolition? Yes we do.... The end of slavery in German East Africa presents a special and rather unexplored case.... Jan-Georg Deutsch does not claim to write a history from below, yet he is able to argue in a convincing way that the end of slavery in East Africa depended to a great extent ‘on the persistent attempts of slaves to gain more meaningful control over their lives and day-to-day affairs’.”—International History Review

”(Deutsch) is particularly strong in his analysis of colonial policy making and implementation, showing how slavery as an institution was contained, if unevenly, but never challenged by the German authorities.”—Journal of Colonialism and Colonial History

Jan-Georg Deutsch is associate professor of African history in the University of Oxford and the author of Emancipation without Abolition in German East Africa, c. 1884-1914.