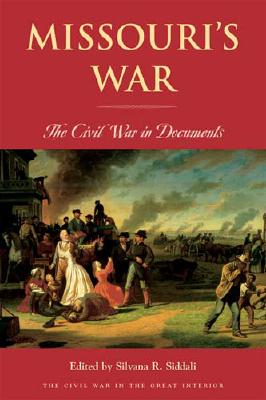 Civil War Missouri stood at the crossroads of America. As the most Southern-leaning state in the Middle West, Missouri faced a unique dilemma. The state formed the gateway between east and west, as well as one of the borders between the two contending armies. Moreover, because Missouri was the only slave state in the Great Interior, the conflicts that were tearing the nation apart were also starkly evident within the state. Deep divisions between Southern and Union supporters, as well as guerrilla violence on the western border, created a terrible situation for civilians who lived through the attacks of bushwhackers and Jayhawkers.

The documents collected in Missouri's War reveal what factors motivated Missourians to remain loyal to the Union or to fight for the Confederacy, how they coped with their internal divisions and conflicts, and how they experienced the end of slavery in the state. Private letters, diary entries, song lyrics, official Union and Confederate army reports, newspaper editorials, and sermons illuminate the war within and across Missouri's borders.

Missouri's War also highlights the experience of free and enslaved African Americans before the war, as enlisted Union soldiers, and in their effort to gain rights after the end of the war. Although the collection focuses primarily on the war years, several documents highlight both the national sectional conflict that led to the outbreak of violence and the effort to reunite the conflicting forces in Missouri after the war.

“Missouri's War is well suited for classroom and reference use, and deserves placement in personal and institutional libraries. Students of the middle western states’s roles in the Civil War should look forward to the publication of future volumes in the series. Recommended.”—Civil War Books and Authors blog

“Missouri’s War, edited by Silvana R. Siddali, is a concise and thoughtfully compiled volume detailing the complexities that defined the state during a tumultuous time.… Certainly, Siddali’s volume will appeal to scholars engaged with nineteenth-century Missouri and the border states, but this readable and scholarly book also serves as a strong example of how remarkably well a skillfully compiled collection of sources can work.”—H-CivWar

“(Silvana Siddali) has created the perfect introduction to Missouri primary sources relating to the American Civil War, a fitting addition to the remarkable Civil War in the Great Interior series published by the Ohio University Press.… This volume is an excellent, inexpensive starting point for students, at any level, writing research papers about Missouri and the Civil War.”—Missouri Historical Review

“Missouri’s War: The Civil War in Documents will make a very nice addition to your war in the west bookshelf. This book has an ‘EXCELLENT’ rating.”—Lone Star Book Review

Silvana R. Siddali is an assistant professor of history at Saint Louis University. She is the author of From Property to Person: Slavery and the Confiscation Act, 1861-1862.