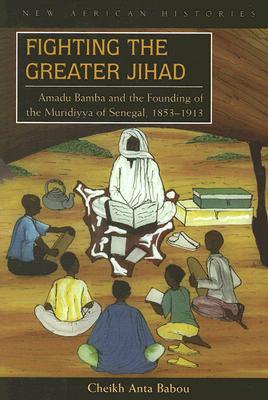 Amadu Bamba and the Founding of the Muridiyya of Senegal, 1853–1913 (New African Histories)

In Senegal, the Muridiyya, a large Islamic Sufi order, is the single most influential religious organization, including among its numbers the nation’s president. Yet little is known of this sect in the West. Drawn from a wide variety of archival, oral, and iconographic sources in Arabic, French, and Wolof, Fighting the Greater Jihad offers an astute analysis of the founding and development of the order and a biographical study of its founder, Cheikh Ahmadu Bamba Mbakke.

Cheikh Anta Babou explores the forging of Murid identity and pedagogy around the person and initiative of Amadu Bamba as well as the continuing reconstruction of this identity by more recent followers. He makes a compelling case for reexamining the history of Muslim institutions in Africa and elsewhere in order to appreciate believers’ motivation and initiatives, especially religious culture and education, beyond the narrow confines of political collaboration and resistance. Fighting the Greater Jihad also reveals how religious power is built at the intersection of genealogy, knowledge, and spiritual force, and how this power in turn affected colonial policy.

Fighting the Greater Jihad will dramatically alter the perspective from which anthropologists, historians, and political scientists study Muslim mystical orders.


Praise For Fighting the Greater Jihad: Amadu Bamba and the Founding of the Muridiyya of Senegal, 1853–1913 (New African Histories)…

“In contrast to the conventional emphases on the political and economic dimensions of the order after its rise to prominence, Babou stresses the early years and Bamba’s contributions to the ‘greater jihad’ of non-violent religious effort.”—International Journal of African Historical Studies

“This book provides an inside perspective that contextualizes the rise of Bamba and is an important source for all interested in the history of this important Sufi order in Senegal.”—Religious Studies Review

“Babou’s study is particularly rewarding for its treatment of the founder’s life and ideas, set against the background of the Mbakke family’s history. The focus on education and tarbiyya offers an interpretation of the social action of the Murid order that is grounded in Sufi thought.”—American Historical Review

“This important book offers a new interpretation of the Muridiyya of Senegal, the late-19th-century Sufi brotherhood founded by Cheikh Amadu Bamba Mbacké.... Babou tempers the insider’s lived experience with the historian’s balanced analysis.”—CHOICE

“In a time when the term jihad has entered our contemporary political lexicon in a variety of simplifications, Cheikh Anta Babou provides a deeply researched analysis of the place of the Greater Jihad in the spiritual, intellectual, and political life of a major West African Sufi movement, the Muridiyya in Senegal. Babou takes seriously the Murids’ own perspectives on their history and religious practices. He uses Wolof and Arabic sources as well as oral histories rarely used by academic historians and brings these internal sources into a conversation with external archival and interpretive sources.”—Richard Roberts, Professor of African History and Director, Center for African Studies, Stanford University

Cheikh Anta Babou is an associate professor of history at the University of Pennsylvania, where he has taught African history and the history of Islam in Africa since 2002. He is the foremost historian of the Muridiyya of Senegal and has published extensively on the genesis of the Murid order, the expansion of the Senegalese and Murid diaspora, and the politics of Sufi Islam in Senegal.