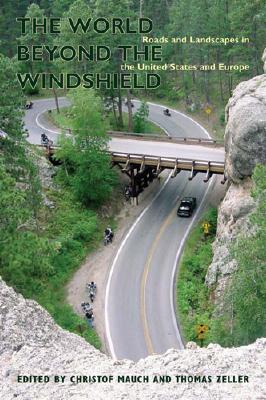 The World beyond the Windshield

Roads and Landscapes in the United States and Europe

For better or worse, the view through a car's windshield has redefined how we see the world around us. In some cases, such as the American parkway, the view from the road was the be-all and end-all of the highway; in others, such as the Italian autostrada, the view of a fast, efficient transportation machine celebrating either Fascism or its absence was the goal. These varied environments are neither necessary nor accidental but the outcomes of historical negotiations, and whether we abhor them or take delight in them, they have become part of the fabric of human existence.

The World beyond the Windshield: Roads and Landscapes in the United States and Europe is the first systematic, comparative look at these landscapes. By looking at examples from the United States and Europe, the chapters in this volume explore the relationship between the road and the landscape thatit traverses, cuts through, defines, despoils, and enhances. The authors analyze the Washington Beltway and the Blue Ridge Parkway, as well as iconic roads in Italy, Nazi Germany, East Germany, and Great Britain. This is a story of the transatlantic exchange of ideas about environment and technology and of the national and nationalistic appropriations of such landscaping.


Praise For The World beyond the Windshield: Roads and Landscapes in the United States and Europe…

“Although the contributors’ particular interests vary widely, these questions lend The World beyond the Windshield a cohesion that is rare and admirable among scholarly anthologies.... The World beyond the Windshield is a valuable and sometimes surprising contribution to the comparative social history of technology, the environment, and automotive transportation.”—Technology and Culture

“We accept that the coming of the automobile was a technological revolution, but we have not fully appreciated how it was a perceptual revolution as well. The essays in this wonderful volume not only provide a clear and graceful journey through various North American and European landscapes of automobility. They also reveal a fascinating and formative set of relations between designers and consumers. The World Beyond the Windshield is comparative history at its best.”—Paul S. Sutter, author of Driven Wild: How the Fight Against Automobiles Launched the Modern Wilderness Movement

“Christof Mauch and Thomas Zeller‘s anthology, The World Beyond the Windshield: Roads and Landscapes in the United States and Europe, marks the beginning of a new and much needed discourse on the subject (historical studies of the automotive landscape).…The essays in The World Beyond the Windshield are accessible and well researched.”—The Journal of Transport History

“Through analyses of the Blue Ridge Parkway, the Needles Highway, and the Washington Beltway, as well as roads in Italy, Nazi Germany, the former East Germany, and postwar U.K., the authors document the transatlantic exchange of ideas about technology and environment. In the process, they also demonstrate how these ideas have been appropriated for national and transnationalistic ends.”—APADE, Indiana University

“(The World beyond the Windshield’s) contributions significantly extend our understanding of the processes through which 20th century highways were envisaged, designed, build, and used.”—Comparativ: Zeitschrift für Global Geschichte...

“A remarkably interesting account of how the various interests, priorities, and perceptions among both highway builders and users interacted in different historical contexts to produce the particular kinds of roads that we see today and so often take for granted.”
— H-German

Christof Mauch holds the chair in history at the Amerika-Institut of the University of Munich and was previously the director of the German Historical Institute in Washington. He is the editor and author of more than twenty books, including Nature in German History; Berlin-Washington, 1800-2000: Capital Cities, Cultural Representation, and National Identities; Geschichte der USA; and Shades of Green: Environmental Activism around the Globe.

Thomas Zeller is an associate professor at the University of Maryland, where he teaches the history of technology, environmental history, and science and technology studies. He is the author of Driving Germany: The Landscape of the German Autobahn, 1930–1970 and coeditor of How Green Were the Nazis? Nature, Environment, and Nation in the Third Reich and Rivers in History: Designing and Conceiving Waterways in Europe and North America.