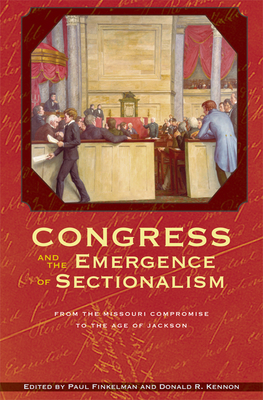 Congress and the Emergence of Sectionalism

In 1815 the United States was a proud and confident nation. Its second war with England had come to a successful conclusion, and Americans seemed united as never before. The collapse of the Federalist party left the Jeffersonian Republicans in control of virtually all important governmental offices. This period of harmony—what historians once called the Era of Good Feeling—was not illusory, but it was far from stable. One-party government could not persist for long in a vibrant democracy full of ambitious politicians, and sectional harmony was possible only as long as no one addressed the hard issues: slavery, race, western expansion, and economic development.

Congress and the Emergence of Sectionalism: From the Missouri Compromise to the Age of Jackson inaugurates a new series for the United States Capitol Historical Society, one that will focus on issues that led to the secession crisis and the Civil War. This first volume examines controversies surrounding sectionalism and the rise of Jacksonian Democracy, placing these sources of conflict in the context of congressional action in the 1820s and 1830s. The essays in this volume consider the plight of American Indians, sectional strife over banking and commerce, emerging issues involving slavery, and the very nature of American democracy.

“It is to be regretted that the rich and powerful too often bend the acts of government to their selfish purposes…. There are no necessary evils in government. Its evils exist only in its abuses. If it would confine itself to equal protection, and, as Heaven does its rains, shower its favors alike on the high and the low, the rich and the poor, it would be an unqualified blessing. In the act before me there seems to be a wide and unnecessary departure from these just principles.”—Andrew Jackson, Veto Message Regarding the Bank of the United States, July 10, 1832

“I consider, then, the power to annul a law of the United States, assumed by one State, incompatible with the existence of the Union, contradicted expressly by the letter of the Constitution, unauthorized by its spirit, inconsistent with every principle on which it was founded, and destructive of the great object for which it was formed.”—Andrew Jackson, Proclamation Regarding Nullification to the People of South Carolina, December 10, 1832


Praise For Congress and the Emergence of Sectionalism: From the Missouri Compromise to the Age of Jackson (Perspective Hist of Congress 1801-1877)…

“The essays are interesting, sophisticated, and nuanced explorations that have new things to say and new ways of thinking about the topics they discuss.… In many of these pieces the authors flesh out our understanding, in others they challenge the usual understanding.”—The Journal of American History

“Whether readers ultimately judge Jackson great or flawed, they will certainly benefit from the insights of the historians in this book.”—The Historian