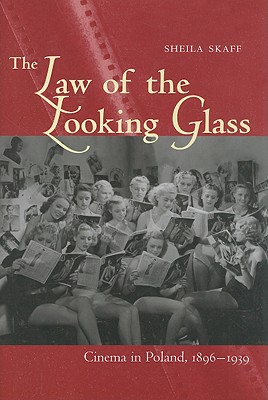 The Law of the Looking Glass (Hardcover)

The Law of the Looking Glass: Cinema in Poland, 1896–1939 reveals the complex relationship between nationhood, national language, and national cinema in Europe before World War II. Author Sheila Skaff describes how the major issues facing the region before World War I, from the relatively slow pace of modernization to the desire for national sovereignty, shaped local practices in film production, exhibition, and criticism. She goes on to analyze local film production, practices of spectatorship in large cities and small towns, clashes over language choice in intertitles, and controversy surrounding the first synchronized sound experiments before World War I. Skaff depicts the creation of a national film industry in the newly independent country, the golden years of the silent cinema, the transition from silent to sound film—and debates in the press over this transition—as well as the first Polish and Yiddish “talkies.” She places particular importance on conflicts in majority-minority relations in the region and the types of collaboration that led to important films such as The Dybbuk and The Ghosts.

The Law of the Looking Glass: Cinema in Poland, 1896–1939 is the first comprehensive history of the country’s film industry before World War II. This history is characterized by alternating periods of multilingual, multiethnic production, on the one hand, and rejection of such inclusiveness, on the other. Through it all, however, runs a single unifying thread: an appreciation for visual imagery.

Sheila Skaff is an assistant professor of film studies at the University of Texas at El Paso.


Praise For The Law of the Looking Glass: Cinema in Poland, 1896–1939 (Polish and Polish American Studies)…

“The originality of the book lies inits treatment of Polish cinema priorto World War II, about which verylittle has been written. Moreover,the author draws on considerableresearch in Polish-language sources,including various film publications,which few scholars have examined.”—Charles O’Brien, author of Cinema's Conversion to Sound: Technology and Film Style in France and the U.S.

“The Law of the Looking Glass not only offers a comprehensive survey of film production during the period, but also examines it as a complex socio-cultural phenomenon that emerged and developed within specific political and historical circumstances.…an invaluable source for anybody interested in both Polish cinema and early cinema more generally.”—The Polish Review

“(Skaff) posits a cinema intent on transcending the ethnic divisions that marked interwar Poland. Her decision to pursue her emphasis on visuality in this direction yields a detailed, often eloquent and succinct summary and synthesis of current Polish-language research on early and interwar cinema.”—Slavic Review

“The story Skaff has to tell is filled with fascinating details and interesting personalities; she tells the story well, with mastery, clarity, and wit.”—The Sarmatian Review

“A remarkable collection of information on the progression of movies in the interwar years.”—Polish American Journal

“Skaff demonstrates how film reflected the divisions in society, especially between Catholics and Jews but also how film makers of both faiths worked together using themes of cooperation. They also used fantasy themes, often from Yiddish literature, that struck a chord in the desperate years between the wars. The blend of artistic and social history is well done, of interest to film scholars and anyone studying Poland before the Nazi invasion.”
— Book News, Inc.

“The Law of the Looking Glass: Cinema in Poland, 1896–1939 offers a fresh perspective on early Polish cinema and challenges its conventional readings. Skaff combines original and up-to-date research with her knowledge of Polish cinema and Polish political and cultural contexts. This is a pioneering work.”
— Marek Haltof, author of Polish National Cinema
or
Not Currently Available for Direct Purchase
Copyright © 2020 American Booksellers Association