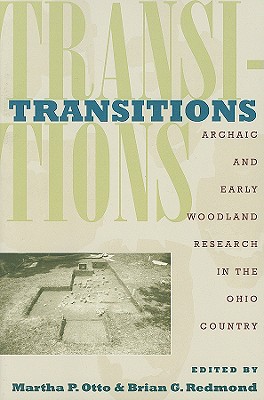 Archaic and Early Woodland Research in the Ohio Country

The late archaic and early woodland peoples lived in the Ohio region between 5,000 and 2,000 years ago. This was a time of transition, when hunters and gatherers began to grow native seed crops, establish more permanent settlements, and develop complex forms of ritual and ceremonialism, sometimes involving burial mound construction.

The focused archaeological studies described in Transitions: Archaic and Early Woodland Research in the Ohio Country shed light on this important episode in human cultural development. The authors describe important archaeological sites such as the rich Late Archaic settlements of southwestern Ohio and the early Adena Dominion Land Company enclosure in Franklin County. They present detailed accounts of Native American behavior, such as the use of smoking pipes by Adena societies and a reconstruction of mound use and ritual.

Transitions is the result of a comprehensive, long-term study focusing on particular areas of Ohio with the most up-to-date and detailed treatment of Ohio’s native cultures during this important time of change. This book will be of great value to students and other readers who wish to go beyond the general and often dated treatments of Ohio archaeology currently available.

Martha P. Otto is Curator of Archaeology at the Ohio Historical Society in Columbus. She is the author of Ohio’s Prehistoric Peoples.

Brian G. Redmond is John Otis Hower Chair and Curator of Archaeology at the Cleveland Museum of Natural History.
or
Not Currently Available for Direct Purchase