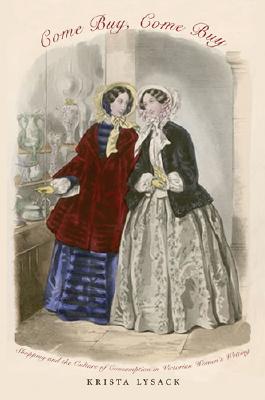 Shopping and the Culture of Consumption in Victorian Women’s Writing

From the 1860s through the early twentieth century, Great Britain saw the rise of the department store and the institutionalization of a gendered sphere of consumption. Come Buy, Come Buy considers representations of the female shopper in British women’s writing and demonstrates how women’s shopping practices are materialized as forms of narrative, poetic, and cultural inscription, showing how women writers emphasize consumerism as productive of pleasure rather than the condition of seduction or loss. Krista Lysack examines works by Christina Rossetti, Mary Elizabeth Braddon, George Eliot, and Michael Field, as well as the suffragette newspaper Votes for Women, in order to challenge the dominant construction of Victorian femininity as characterized by self-renunciation and the regulation of appetite.


Praise For Come Buy, Come Buy: Shopping and the Culture of Consumption in Victorian Women’s Writing…

“(T)his is a well-written and diligently researched study of critical issues in nineteenth-century consumer culture. One of the book’s strengths is its extensive use of archival sources, including women’s magazines and newspapers, shoppers’ guides, and books on domestic management. These culturally significant texts usefully deepen and extend the close readings of literature, enabling richly detailed arguments to emerge.”—Victorian Studies

“Krista Lysack’s Come Buy, Come Buy provides an origi­nal, revisionary approach to the study of British women’s writing, and its explication of the relationships among consumer culture, identity and citizenship makes an important contribution to nineteenth-century scholarship.”—Lorraine Janzen Kooistra, author of Christina Rossetti and Illustration: A Publishing History

“Krista Lysack’s Come Buy, Come Buy is a deft, compact, and polished consideration of (mainly middle class) female shopping as a literary and cultural theme in the Victorian period.”—Tulsa Studies in Women’s Literature

“This is a book that convincingly argues, in a smart, clear, and entertaining manner, how much women could gain in the markets of Victorian England.” —Nineteenth-Century Gender Studies

Krista Lysack teaches in the department of English at the University of Western Ontario. Her articles have appeared in such journals as Victorian Poetry, Nineteenth-Century Contexts, and SEL.