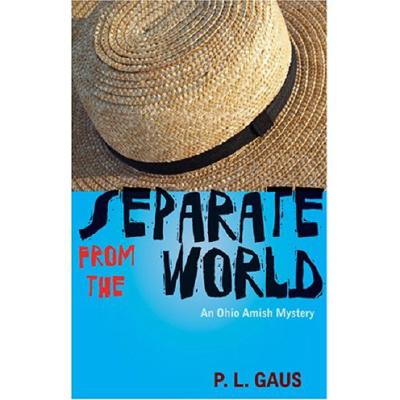 Separate from the World (Hardcover)

As another college year draws to an end, Professor Michael Branden is weary after nearly thirty years of teaching. Sitting in his office on a warm spring day, he receives an unexpected visit from an Amish man who claims his brother, a dwarf like himself, has been murdered. Their discussion of the odd details of the case is interrupted by a commotion on campus, which turns out to be the apparent suicide of a young woman, who, it seems, has leapt to her death from the college bell tower.

The investigations of these two deaths become intertwined as Professor Branden again teams up with his colleagues Pastor Cal Troyer and Sheriff Bruce Robertson to seek explanations for these bizarre events.

Separate from the World is a story of a rift between two Amish factions, one that favors the use of medicine and that participates in a college study of genetic traits particular to the Amish community, and the other that rejects any outside influence.

Once more, P. L. Gaus takes us inside a separate culture and, in a manner both gentle and grim, highlights the complex relationship of the Amish and the “English” as they live inside or outside each other’s orbits.

P. L. Gaus is the author of the Ohio Amish Mysteries including, most recently, "A Prayer for the Night, Clouds without Rain," and "Cast a Blue Shadow." He teaches chemistry and alternative cultures at the College of Wooster in Wooster, Ohio.

Praise For Separate from the World: An Ohio Amish Mystery (The Amish-Country Mysteries)…

“Gaus is a sensitive storyteller who matches his cadences to the measured pace of Amish life, catching the tensions among the village’s religious factions.”
— The New York Times

“[Gaus’s] writing is crisp and fast-paced, his depiction of the Amish sympathetic yet realistic…. [An] enjoyable, interesting novel. Only one caveat: It’s too short!”
— Ohioana Quarterly

“Two unexplained deaths bring home to history professor Michael Branden (A Prayer for the Night, 2006, etc.) the powers and limitations of modern science.… A perceptive look at problems that have no easy solutions.”
— Starred Review, Kirkus Reviews

“The pro-medicine/anti-medicine debate that splits the Amish community literally pits brother against brother and the clash of cultures, and of ideals within a culture, adds complex depth to Gaus’ story.”
— Mystery Scene Magazine