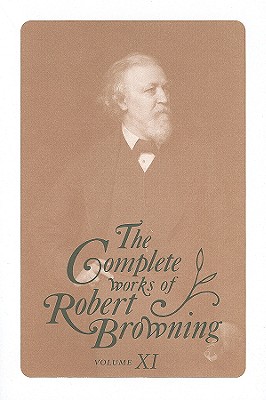 In seventeen volumes, copublished with Baylor University, this acclaimed series features annotated texts of all of Robert Browning’s known writing. The series encompasses autobiography as well as influences bearing on Browning’s life and career and aspects of Victorian thought and culture.

Volume XI of The Complete Works of Robert Browning contains two strikingly disparate long poems from the 1870s, Fifine at the Fair and Red Cotton Night-Cap Country. In Fifine at the Fair, Browning creates an idiosyncratic version of the Don Juan figure, a distinctly post-Romantic and intellectual Don Juan who derives little from any literary predecessor. The legendary character is realized in a modern French setting, the village of Pornic, a favorite vacation spot for Browning. The poem is a sustained exercise in self-justification and casuistry, with Don Juan persuading himself that he can reconcile his love of his wife with his carnal love for a gipsy girl.

Though Red Cotton Night-Cap Country is similarly concerned with a struggle between spirit and flesh, the poem is entirely based in contemporary events. Using newspaper accounts and legal documents, Browning tells the strange and shocking tale of a rich and devout Frenchman who throws himself from the roof of his chateau, convinced that heaven will deliver him from death. Upon the question of his sanity hinges the disposition of his considerable estate, and the poet traces the claims and counterclaims to their settlement in court only a few months before he wrote the poem.

As always in this series of critical editions, a complete record of textual variants is provided, as well as extensive explanatory notes.

“The Ohio edition offers a virtual rare bookroom for any Browning poem where the determined critic can trace the author’s intentions and craft.”—Victorian Poetry

“The Ohio [Browning] is everything a reader could wish.”—English

“The editorial policy of the Ohio edition has always been completeness, with the recording of all variants, changes, and corrections made by the poet himself, and these volumes continue that aim with admirable care and painstaking attention to detail.…The fifty-six pages of notes on Red Cotton Night-Cap Country are an unexpected delight, and reveal (Michael) Bright’s love of his subject and his searching out of all relevant information about it.”—Journal of Browning Studies

Michael Bright is a professor emeritus at Eastern Kentucky University. He has written books and articles on nineteenth-century literature and Gothic Revival architecture.