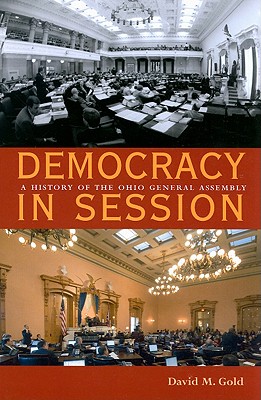 For more than 200 years no institution has been more important to the development of the American democratic polity than the state legislature, yet no political institution has been so neglected by historians. Although more lawmaking takes place in the state capitals than in Washington D.C., scholars have lavished their attention on Congress, producing only a handful of histories of state legislatures. Most of those histories have focused on discrete legislative acts rather than on legislative process, and all have slighted key aspects of the legislative environment: the parliamentary rules of play, the employees who make the game possible, the physical setting—the arena—in which the people’s representatives engage in conflict and compromise to create public policy.

This book relates in fascinating detail the history of the Ohio General Assembly from its eighteenth-century origins in the Northwest Territory to its twenty-first-century incarnation as a full-time professional legislature. Democracy in Session explains the constitutional context within which the General Assembly functions, examines the evolution of legislative committees, and explores the impact of technology on political contests and legislative procedure. It sheds new light on the operations of the House and Senate clerks’ offices and on such legislative rituals as seat selection, opening prayers, and the Pledge of Allegiance. Partisan issues and public policy receive their due, but so do ethics and decorum, the election of African American and female legislators, the statehouse, and the social life of the members. Democracy in Session is, in short, the most comprehensive history of a state legislature written to date and an important contribution to the story of American democracy.


Praise For Democracy in Session: A History of the Ohio General Assembly (Law Society & Politics in the Midwest)…

“Democracy in Session effectively demolishes the German Chancellor Otto von Bismarck’s famous statement that “Laws are like sausages. No one should see them being made.” David Gold has written as close to a definitive history of the General Assembly—the most consequential and least understood political institution in the history of Ohio—as we are ever likely to have. With a host of colorful characters and anecdotes, Gold expertly details the contested development of procedures, customs, membership, and legislation, all the while showing how changes in the General Assembly have reflected changes in Ohio itself.”—Andrew Cayton, Distinguished Professor of History at Miami University and author of Ohio: The History of a People

“Intensely readable, interspersing a wide-raging synthesis (part-time rough-and-tumble body to full-time, professional institution) with highly specific anecdotes, Democracy in Session is a valuable contribution to the study of U.S. politics.”—Indiana Magazine of History

“(A) book badly needed and finally delivered…Gold gives readers bits and pieces of interesting stories as he builds his history. He does it well and he footnotes thoroughly. A historian-turned-lobbyist friend of mine looked at the book and said ‘wow’ and is now engrossed in the 600 plus page book.”—Columbus Bar Lawyers Quarterly

“This book makes an important contribution to our understanding of the history of the Ohio legislature and indeed, of our great State.”—Bill Harris, President of the Ohio State Senate

“How wonderful that we now have a comprehensive, scholarly, and readable history of such an important institution as the General Assembly. David Gold’s book is more than a history of the legislature's work. Democracy in Session also tells the story of how a modern, professional body of lawmakers developed over the past two centuries.” —E. Gordon Gee, President, The Ohio State University

David M. Gold received his law degree and doctorate in history from the Ohio State University. He is the author of numerous books and articles on legal and political history, including Democracy in Session: A History of the Ohio General Assembly and An Exemplary Whig: Edward Kent and the Whig Disposition in American Politics and Law.