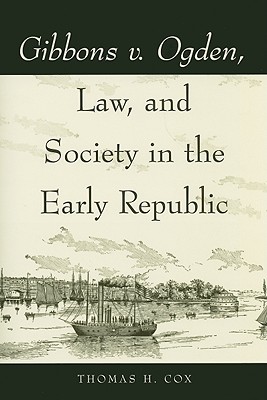 Gibbons v. Ogden, Law, and Society in the Early Republic examines a landmark decision in American jurisprudence, the first Supreme Court case to deal with the thorny legal issue of interstate commerce.

Decided in 1824, Gibbons v. Ogden arose out of litigation between owners of rival steamboat lines over passenger and freight routes between the neighboring states of New York and New Jersey. But what began as a local dispute over the right to ferry the paying public from the New Jersey shore to New York City soon found its way into John Marshall’s court and constitutional history. The case is consistently ranked as one of the twenty most significant Supreme Court decisions and is still taught in constitutional law courses, cited in state and federal cases, and quoted in articles on constitutional, business, and technological history.

Gibbons v. Ogden initially attracted enormous public attention because it involved the development of a new and sensational form of technology. To early Americans, steamboats were floating symbols of progress—cheaper and quicker transportation that could bring goods to market and refinement to the backcountry. A product of the rough-and-tumble world of nascent capitalism and legal innovation, the case became a landmark decision that established the supremacy of federal regulation of interstate trade, curtailed states’ rights, and promoted a national market economy. The case has been invoked by prohibitionists, New Dealers, civil rights activists, and social conservatives alike in debates over federal regulation of issues ranging from labor standards to gun control. This lively study fills in the social and political context in which the case was decided—the colorful and fascinating personalities, the entrepreneurial spirit of the early republic, and the technological breakthroughs that brought modernity to the masses.

Praise For Gibbons v. Ogden, Law, and Society in the Early Republic…

“A highly original and much-needed book that puts Gibbons v. Ogden in historical context. . . . [A] major contribution to our understanding of a landmark case.”
— Daniel W. Hamilton, author of The Limits of Sovereignty: Property Confiscation in the Union and the Confederacy during the Civil War

“The scholarship is very deep and broad. . . . The tale is important enough and the treatment so well balanced that general readers of American history will find much of use in the work.”
— Richard F. Hamm, author of Shaping the Eighteenth Amendment: Temperance Reform, Legal Culture, and the Polity, 1880–1920

“(Gibbons v. Ogden is) a study that reflects extensive research, is rich in detail, and may in certain key respects prove definitive.”
— Law & Politics Book Review

“Cox helps us understand why Gibbons is so significant for understanding the constitutional footing for such federal power (regulating interstate commerce) and the wider importance of the decision in U. S. Constitutional history. Perhaps even more importantly, Cox examines the broader historical context out of which Gibbons emerged, especially how steamboat transportation became central to debates about ‘internal improvements’ and the role of the courts in navigating conflicts over the direction of such efforts in the early republic.”
— The History Teacher

“Figures such as Robert Fulton, and chancellors Robert R. Livingston and James Kent come alive in these pages, not always in ways that flatter them. This is as it should be.…Prodigious research and meticulous detail are the strengths of this book. The resulting narrative is exhaustive and potentially definitive….”
— Law & History Review

“Thomas Cox’s new book…certainly acknowledges that importance (of the legal case), but it goes beyond the case itself to examine the legal, social, business, and technological milieu of the Early Republic.… Cox uses a brisk writing style in his ten short chapters, and so the book is an enjoyable read. The research is impressive, with countless manuscript collections, court cases, and newspaper accounts forming the book’s backbone.”
— Business History Review

“The Steamboat Case of 1824 is familiar to most historians of the United States, but the background to it is not. Thomas H. Cox has rectified that.… Cox’s monograph is a superb in-depth study of the issues and personalities involved that led in several stages to the Gibbons v. Ogden decision in 1824.”
— American Historical Review
or support indie stores by buying on
Copyright © 2020 American Booksellers Association