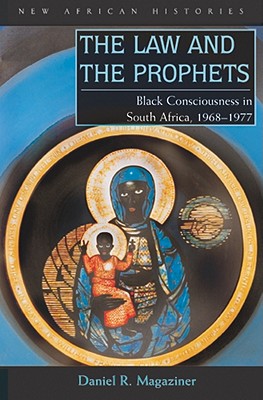 The Law and the Prophets

“No nation can win a battle without faith,” Steve Biko wrote, and as Daniel R. Magaziner demonstrates in The Law and the Prophets, the combination of ideological and theological exploration proved a potent force.

The 1970s are a decade virtually lost to South African historiography. This span of years bridged the banning and exile of the country’s best-known antiapartheid leaders in the early 1960s and the furious protests that erupted after the Soweto uprisings of June 16, 1976. Scholars thus know that something happened—yet they have only recently begun to explore how and why.

The Law and the Prophets is an intellectual history of the resistance movement between 1968 and 1977; it follows the formation, early trials, and ultimate dissolution of the Black Consciousness movement. It differs from previous antiapartheid historiography, however, in that it focuses more on ideas than on people and organizations. Its singular contribution is an exploration of the theological turn that South African politics took during this time. Magaziner argues that only by understanding how ideas about race, faith, and selfhood developed and were transformed in this period might we begin to understand the dramatic changes that took place.


Praise For The Law and the Prophets: Black Consciousness in South Africa, 1968–1977 (New African Histories)…

“This thoughtful, imaginative intellectual history of South Africa’s black consciousness movement does exactly what the author intended it to do—present a full rather than a solely antiapartheid resistance history of a formative era in the rainbow nation’s emergence from white rule…. A major addition to the revisionary literature on modern South African politics and thought. Highly recommended.”—CHOICE

“A sterling contribution…. Readers are given excellent insights into the organised black politics between the 1960s and 1980s…. This book is a triumph!”—Sowetan

“The Law and the Prophets is intellectual history of the first order. It is a revealing and thought-provoking study of the messiness that attended the evolution of BC, an ideology that sought first to liberate the individual, and then a people, and ultimately, helped transform South African society.”—Safundi

“The Law and the Prophets is an inspired work of political and intellectual analysis that provides a new baseline for rewriting histories of South Africa’s ever evolving present.”—Social History/Histoire Sociale

“(M)arvelous and inventive…. (The Law and the Prophets) points a way for future scholars to revisit the legacies of black nationalism, Black Consciousness, and Biko in the years to come.”—H-SAfrica

“The Law and the Prophets marks a shift away from definitions of the anti-apartheid struggle that foreground the ANC as a vanguard anticolonial movement. (Magaziner’s) is a study of minor actors and activists who were surprised by their unexpected emergence within national politics. . . .” —The Journal of Interdisciplinary History

Daniel Magaziner teaches South African and nineteenth- and twentieth-century African history at Yale University. He is the author of The Law and the Prophets: Black Consciousness in South Africa, 1968–1977.