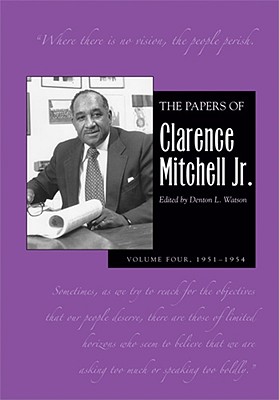 Volume IV of The Papers of Clarence Mitchell Jr. covers 1951, the year America entered the Korean War, through 1954, when the NAACP won its Brown v. Board of Education case, in which the Supreme Court declared that segregation was discrimination and thus unconstitutional. The decision enabled Mitchell to implement the legislative program that President Truman’s Committee on Civil Rights outlined in its landmark 1947 report, To Secure These Rights.

The papers show how Mitchell persuaded President Truman to extend further the Fair Employment Practices Commission idea by issuing an executive order to enforce the nondiscrimination clause in government contracts with private industry; President Eisenhower further revised and strengthened this order. Mitchell expanded President Eisenhower’s commitment to ending discrimination in federal funding by leading the struggle to get Congress to enact laws barring such practices in aid to education and all similar programs. Mitchell ultimately won the support of both presidents in ending segregation in many government-supported facilities and throughout the armed services.

He expanded President Eisenhower’s commitment to ending discrimination in federal funding by leading the struggle to get Congress to enact laws barring such practices in aid to education and all similar programs.

Volumes III and IV are an invaluable reference in tracing the NAACP’s multifaceted struggle under Mitchell’s leadership for passage of the civil rights laws.


Praise For The Papers of Clarence Mitchell Jr., Volume IV: Director of the NAACP Washington Bureau, 1951–1954…

“The Papers of Clarence Mitchell, Jr. is a primary source and analytical goldmine for scholars of civil rights and labor struggles in the twentieth-century United States… . Well organized, engagingly written, and edited with cogent commentary, these two volumes (III & IV) take us inside Mitchell’s activist office and let us hear his own words.”—The Journal of Southern History

“Clarence Mitchell, Jr., for decades waged in the halls of Congress a stubborn, resourceful and historic campaign for social justice. The integrity of this ‘101st senator’ earned him the respect of friends and adversaries alike. His brilliant advocacy helped translate into law the protests and aspirations of millions consigned for too long to second-class citizenship. The hard-won fruits of his labors have made America a better and stronger nation.”
— President Jimmy Carter, citation on the Presidential Medal of Freedom, presented June 9, 1980

Clarence Mitchell Jr. was a civil rights activist and a chief lobbyist for the NAACP.

Denton L. Watson, formerly director of public relations for the National Association for the Advancement of Colored People, is an associate professor at SUNY College at Old Westbury. He is author of Lion in the Lobby, Clarence Mitchell, Jr.’s Struggle for the Passage of Civil Rights Laws and editor of The Papers of Clarence Mitchell Jr.