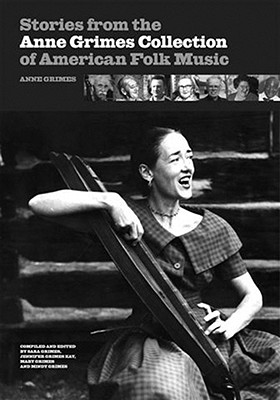 Stories from the Anne Grimes Collection of American Folk Music is a treasury of American traditional music and Ohio’s folklife heritage.

Traveling along the highways and byways of Ohio in the 1950s as a folksinger and collector of traditional music, Anne Grimes encountered people from many different backgrounds who opened up their homes to her to share their most precious family heirlooms—their songs. She recorded these treasures for posterity and further preserved them through her lectures and recitals.

After years of performance and research on her material, Anne Grimes decided to write about it all. This beautiful book presents her lively portraits of the major contributors with photographs taken by her husband, James W. Grimes; lyrics and extensive notes on the songs; and a CD sampler that includes performances by her contributors, most of whom had not been previously recorded. It also contains selections from Bob Gibson, Carl Sandburg, Pete Seeger, Jenny Wells Vincent, as well as Grimes herself. The Anne Grimes Collection is preserved in the Library of Congress.

Besides songs, Anne Grimes also collected dulcimers, and portraits of these folk instruments and their players—including Anne Grimes herself—are featured throughout the book and on the CD. Photographsinclude some of the forty-two rare vintage dulcimers and other instruments collected by Anne Grimes that are now preserved at the National Museum of American History at the Smithsonian Institution.

Anne Grimes, Ohio folksinger and scholar, died at the age of ninety-one in 2004 while working on this book. A classically trained musician who served as music and dance critic for the Columbus Citizen in Columbus, Ohio, before embarking on her career in folk music, she recorded on Folkways, performed at national folk festivals, and served as president of the Ohio Folklore Society. The book was edited by her daughters, Sara Grimes, Jennifer Grimes Kay, Mary Grimes, and Mindy Grimes.

“Stories from the Anne Grimes Collection is an excellent introduction to Grimes’s fieldwork as well as a tribute to some wonderful and diverse singers from the Buckeye State who have contributed to a facet of culture which this country prides itself on: American folk music.”—Appalachian Journal

“I love this book. It captures Anne Grimes’ spirit and presents her work in a way she would have been proud of; not surprisingly, since her children who have assembled it were engaged in her work. The body of materials presented here includes a wide variety of folksong materials from a number of different traditions, and will be of interest to scholars, collectors, performers, and students of Ohio history and culture. The photographs provide an extremely valuable complement to the descriptive text and song lyrics.”—Timothy Lloyd, Executive Director, American Folklore Society

“Anne Grimes was, quite obviously, a dynamo.… This book is a treasure.”—Notes: Quarterly Journal of the Music Library Association

"Anne's work lives on. What a wonderful book this is. I'm proud to be a part of it."—Pete Seeger

“Every lover of folk music owes Anne Grimes and her daughters an incalculable debt…. Most of the text of the book consists of first-hand descriptions of many of her informants, their lives and worlds, and their music. It makes wonderful reading, and demonstrates the richness that has been added to our knowledge of folk music as collecting has moved from text to context…. dulcimer lovers, you must get this book and its accompanying record. Get it today!”—Dulcimer Player’s News
or
Not Currently Available for Direct Purchase
Copyright © 2020 American Booksellers Association