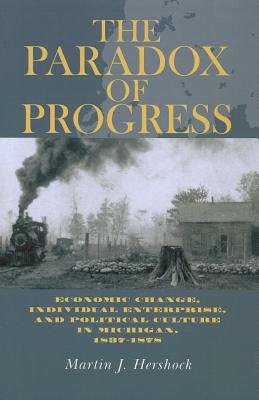 The Paradox of Progress (Paperback)

Americans have long recognized the central importance of the nineteenth-century Republican party in preserving the Union, ending slavery, and opening the way for industrial capitalism. On the surface, the story seems straightforward -- the party's “free labor” ethos, embracing the opportunity that free soil presented for social and economic mobility, and condemning the danger that slavery in the territories posed for that mobility, foreshadowed the GOP's later devotion to unfettered enterprise and industrial capitalism. In reality, however, the narrative thread is not so linear. This work examines the contradiction that lay at the heart of the supremely influential ideology of the early Republican party. The Paradox of Progress explores one of the most profound changes in American history -- the transition from the anti-market, anti-monopoly, and democratic ideology of Jacksonian America to the business-dominated politics and unregulated excesses of Gilded Age capitalism.

Guiding this transformation was the nineteenth-century Republican party. Drawing heavily from both the pro-market commitments of the early Whig party and the anti-capitalist culture of Jackson's Democratic party, the early Republican party found itself torn between these competing values. Nowhere was this contested process more obvious or more absorbing than in Civil War-era Michigan, the birthplace of the Republican party.

In The Paradox of Progress, a fascinating look at the central factors underlying the history of the GOP, Martin Hershock reveals how in their determination to resolve their ideological dilemma, Republicans of the Civil War era struggled to contrive a formula that wo uld enable them to win popular elections and to model America's acceptance of Gilded Age capitalism.

Winner of the 2004 Award of Merit from the Historical Society of Michigan.

Martin Hershock is an associate professor of history at the University of Michigan–Dearborn. He is the author of The Paradox of Progress: Economic Change, Individual Enterprise, and Political Culture in Michigan, 1837–1878 (Ohio, 2003).

Praise For The Paradox of Progress: Economic Change, Individual Enterprise, and Politic Culture in Michigan, 1837-1878…

"It can be compared to the best of the studies of state politics in this era done in the last quarter century… [and] is certainly one of the most important works written on nineteenth-century Michigan."
— Lawrence Frederick Kohl, author of The Politics of Individualism: Parties and the American Character in the Jacksonian Era

“Martin Hershock confronts a question often posed by students of American history: How did the antebellum Republican Party, firmly rooted in antislavery, quickly evolve into a party identified with big business?…One of this book’s many strengths is Herschock’s analysis of how the Republican Party coalesced around discontented Whigs, Democrats, and Free Soilers…. Hershock’s inviting prose effectively challenges historians’ arguments while telling a compelling story—one that includes an outstanding chapter on Michigan politics during the Civil War. This book deserves a wide audience.”
— Michigan Historical Review

“(A) detailed, meticulously researched study of the impact of an emerging market economy on the sociopolitical cultures of Michigan between two of the mid-19th-century US’s deepest business depressions…. (T)his well-written book is likely to become the starting point for all further studies.”
— Choice

“Hershock’s story is well told. It is especially important that he carries it into the 1870s in order to highlight the betrayal felt by Republicans all over the upper Midwest in the wake of the Union triumph.”
— Journal of the Early American Republic
or
Not Currently Available for Direct Purchase
Copyright © 2020 American Booksellers Association