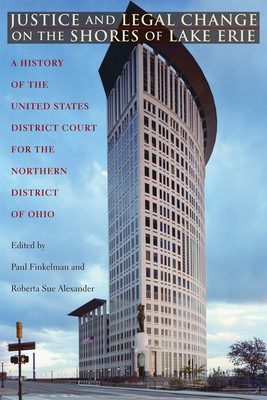 Justice and Legal Change on the Shores of Lake Erie

Justice and Legal Change on the Shores of Lake Erie explores the many ways that the United States District Court for the Northern District of Ohio has affected the region, the nation, the development of American law, and American politics.

The essays in this book, written by eminent law professors, historians, political scientists, and practicing attorneys, illustrate the range of cases and issues that have come before the court. Since the court’s inception in 1855, judges have influenced economic developments and social issues, beginning with the court’s most famous early case, involving the rescue of the fugitive slave John Price by residents of Northern Ohio. Chapters focusing on labor strikes, free speech, women’s rights, the environment, the death penalty, and immigration illustrate the impact this court and its judges have had in the development of society and the nation’s law. Some of the cases here deal with local issues with huge national implications xad—like political corruption, school desegregation, or pollution on the Cuyahoga River. But others are about major national issues that grew out of incidents, such as the prosecution of Eugene V. Debs for opposing World War I, the litigation resulting from the Kent State shootings and opposition to the Vietnam War, and the immigration status of the alleged Nazi war criminal John Demyanjuk.

This timely history confirms the significant role played by district courts in the history of the United States.


Praise For Justice and Legal Change on the Shores of Lake Erie: A History of the United States District Court for the Northern District of Ohio (Law Society & Politics in the Midwest)…

“From the Fugitive Slave Act trials in the 1850s to the draft registration resister trial in the 1980s, political activists have voiced their claims about the most salient issues of the times during their trials in federal courts. While the trial of Eugene Debs is the most well-known example discussed in the book, the stories of all the litigants in these politically charged cases are eloquent testimonies. Justice and Legal Change on the Shores of Lake Erie also provides a close-up view of the role of federal law in addressing social issues, including labor strife, race discrimination, the death penalty, and environmental damage. This book makes a significant contribution to the field of legal history.”—Rebecca E. Zietlow, Charles W. Fornoff Professor of Law and Values at the University of Toledo College of Law, and author of Enforcing Equality: Congress, the Constitution and the Protection of Individual Rights

“All of the essays in the book are well written, a tribute not only to the skill of the authors but also, no doubt, of the editors.” —H-Law

Roberta Sue Alexander is Distinguished Service Professor of History and Professor Emeritus at the University of Dayton. She is the author of North Carolina Faces the Freedmen: Race Relations During Presidential Reconstruction, 1865-67.