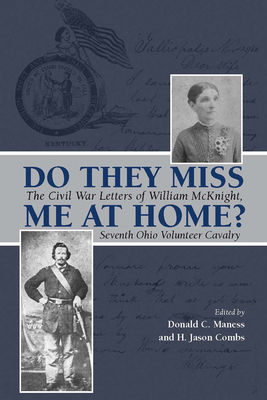 Do They Miss Me at Home? (Paperback)

William McKnight was a member of the Seventh Ohio Volunteer Cavalry from September 1862 until his death in June of 1864. During his time of service, McKnight penned dozens of emotion-filled letters, primarily to his wife, Samaria, revealing the struggles of an entire family both before and during the war.

This collection of more than one hundred letters provides in-depth accounts of several battles in Kentucky and Tennessee, such as the Cumberland Gap and Knoxville campaigns that were pivotal events in the Western Theater. The letters also vividly respond to General John Hunt Morgan’s raid through Ohio and correct claims previously published that McKnight was part of the forces chasing Morgan. By all accounts Morgan did stay for a period of time at McKnight’s home in Langsville during his raid through Ohio, much to McKnight’s horror and humiliation, but McKnight was in Kentucky at the time. Tragically, McKnight was killed in action nearly a year later during an engagement with Morgan’s men near Cynthiana, Kentucky.

Donald C. Maness is the dean of the College of Education at Arkansas State University and a professor in the Teacher Education department. He is an avid Civil War enthusiast.

H. Jason Combs is an associate professor of geography at the University of Nebraska Kearney. He has authored a number of articles appearing in refereed journals such as Material Culture, the Journal of Cultural Geography, and the Professional Geographer.

Praise For Do They Miss Me at Home?: The Civil War Letters of William McKnight, Seventh Ohio Volunteer Cavalry…

“The letters of William McKnight . . . allow the reader to ride alongside McKnight as he patrols contested terrain and worries over John Morgan’s raid through his home town, and they remind us of the sacrifices that the war exacted from families as soldiers fought to protect their home and country and to shape the nation for future generations.”
—Christine Dee, Fitchburg State College, Editor of Ohio’s War: The Civil War in Documents

“This treasure trove of letters from an Ohio Union soldier to his family provides great insight into the day to day life of a Civil War soldier, and how a soldier’s absence affected his family as well.“
— Ohioana Quarterly

“Do They Miss Me at Home?... is a fascinating and intimate look at experiences of a typical Ohio soldier and offers an insightful look into how one man balanced the competing desires for home and family with the overriding call of duty. It is a valuable contribution to Civil War scholarship.”
— Northwest Ohio History

“Donald C. Maness and H. Jason Comb have contributed another first-rate published primary source that is certain to appeal to amateur and professional historians interested in Civil War Ohio and the Ohio Valley, wartime combat operations in Kentucky and Tennessee, and the western theater in general.… Maness and Combs’s carefully edited work succeeds in its stated goal of capturing ‘the human side of war’ and does historians a great service in their unending quest to better understand the humanity and complexity of our nation’s most violent era.”
— Civil War History

“Dozens of Civil War letter collections have been published over the years—some of them heavily corrected, and even censored, by those who brought them to light. Unlike those, this book allowed the letter writer, Ohio cavalryman William McKnight, to speak clearly to his wife and to the modern reader. His grammar, spelling, and punctuation reflect his education, but his voice is not filtered through the editors’ lens.”
— Xenia Daily Gazette

“As a Union cavalryman in the western theater, a member of Ohio’s ‘River Regiment,’ William McKnight had a special vantage point for viewing some of the most dramatic events of the Civil War, and he poured his thoughts and impressions into his letters home. Ably edited in this timely collection, those letters make for interesting reading, sure to be welcomed by both amateur and professional historians of the Civil War.”
— Steven E. Woodworth, Author of Nothing but Victory: The Army of the Tennessee, 1861–1865
or support indie stores by buying on
Copyright © 2020 American Booksellers Association