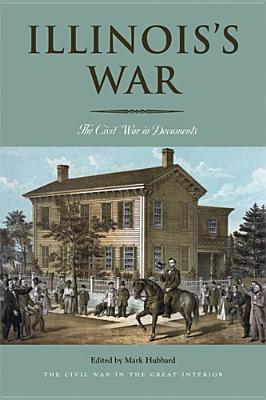 On the eve of the Civil War and after, Illinois was one of the most significant states in the Union. Its history is, in many respects, the history of the Union writ large: its political leaders figured centrally in the war’s origins, progress, and legacies; and its diverse residents made sacrifices and contributions—both on the battlefield and on the home front—that proved essential to Union victory.

The documents in Illinois’s War reveal how the state and its people came to assume such a prominent role in this nation’s greatest conflict. In these crucial decades Illinois experienced its astonishing rise from rural frontier to economic and political powerhouse. But also in these years Illinois was, like the nation itself, a “house divided” over the expansion of slavery, the place of blacks in society, and the policies of the federal government both during and after the Civil War. Illinois’s War illuminates these conflicts in sharp relief, as well as the ways in which Illinoisans united in both saving the Union and transforming their state. Through the firsthand accounts of men and women who experienced these tumultuous decades, Illinois’s War presents the dramatic story of the Prairie State’s pivotal role in the sectional crisis, as well as the many ways in which the Civil War era altered the destiny of Illinois and its citizens.

Illinois’s War is the first book-length history of the state during the Civil War years since Victor Hicken’s Illinois in the Civil War, first published in 1966. Mark Hubbard has compiled a rich collection of letters, editorials, speeches, organizational records, diaries, and memoirs from farmers and workers, men and women, free blacks and runaway slaves, native-born and foreign-born, common soldiers and decorated generals, state and nationally recognized political leaders. The book presents fresh details of Illinois’s history during the Civil War era, and reflects the latest interpretations and evidence on the state’s social and political development.


Praise For Illinois’s War: The Civil War in Documents (Civil War in the Great Interior)…

“The editor has done a splendid job assembling documents that tell the story of Illinois during the Civil War, and the volume will become one of the indispensable books on the Civil War in Illinois.”—Theodore Karamanski, Loyola University Chicago, author of Rally ’Round the Flag: Chicago and the Civil War

“Through newspaper editorials, diaries, legislation, memoirs, letters, and public speeches, the reader is given a rich view of the ways Illinoisans shaped the war…. Together, the sources in this volume chronicle the numerous ways thatwar transformed life for Illinoisans…. This book stands on its own as a valuable resource for educators who want to introduce their students to the process of historical interpretation, as many of the documents are paired to offer contrasting viewpoints on an issue. It will also appeal more broadly to readers interested in Midwestern, gender, ethnic, labor, African American, and political history, and to anyone seeking better to understand the impact of the war on the Northern home front.”—H-CivWar

“A notable book within an important series, Hubbard offers an indispensable volume for students of the Civil War and Midwestern history. Well-suited as a jumping off point for graduate students and serious researchers, Illinois’s War will also appeal to undergraduates and buffs due to its readability.”—Ohio Valley History

“The best source of (Illinois Civil War) information is often found in the actual writings of the state’s residents, from farmers and workers to freed blacks and runaway slaves. And these make up the bulk of the book with each chapter preceded by Hubbard’s substantial introduction.”—Book News

Mark Hubbard is a professor of history at Eastern Illinois University. His reviews and essays have appeared in numerous scholarly journals, and his book Beyond Party: Cultures of Antipartisanship in Northern Politics before the Civil War was published in 2002.