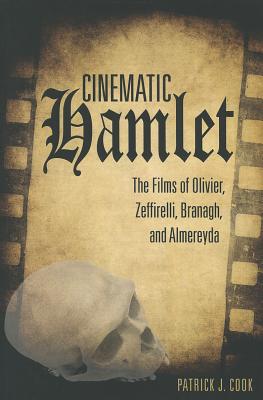 The Films of Olivier, Zeffirelli, Branagh, and Almereyda

Applying recent developments in neuroscience and psychology, Patrick J. Cook argues that film is a medium deploying an abundance of devices whose task it is to direct attention away from the film’s viewing processes and toward the object represented. Through careful analysis of each film’s devices, he explores the ways in which four brilliant directors rework the play into a radically different medium, engaging the viewer through powerful instinctive drives and creating audiovisual vehicles that support and complement Shakespeare’s words and story.

Cinematic Hamlet will prove to be indispensable for anyone wishing to understand how these films rework Shakespeare into the powerful medium of film.


Praise For Cinematic Hamlet: The Films of Olivier, Zeffirelli, Branagh, and Almereyda…

“Patrick Cook’s Cinematic Hamlet combines the anthropologist’sthick description with the latest in film theory from Bordwell, Carroll, McGinn, Sharff, Thompson and Thomson to produce challenging and provocative assessments of four major Hamlet films by Laurence Olivier, Franco Zeffirelli, KennethBranagh, and Michael Almereyda. Cook has new and interesting cinematicideas to share about all of these films, especially Almereyda’s Hamlet, where his chapter is impishly longer than his already exhaustive treatment of Branagh’s four-hour film of the play. Cook provides a fresh new voice in the ever expanding field of Shakespeare on Film.”—Samuel Crowl, author of Shakespeare at the Cineplex: The Kenneth Branagh Era

“A ramble through the notes (of Cinematic Hamlet) leaves one with the impression that Cook has read everything of relevance and can be trusted when correcting the wayward critic. His approach is generally thorough, fluent, and smart. Summing Up: Highly recommended.”—Choice

“Cook gives us a book which deftly leads the reader through the labyrinths of cinematic art and craft and also provides foundational lessons on how to see a film as a film.”—Film-Philosophy Journal

“The text is precise, detailed (in relation to textual, visual, and aural decisions), and eminently readable.”—Years Work in English Studies

“Patrick J. Cook’s Cinematic Hamlet: The Films of Olivier, Zeffirelli, Branagh, and Almereyda will be invaluable both to those who want to teach Shakespeare on film and to those who simply want to understand these films, or film in general, better. His close readings are a model of how to pay attention, drawing on cognitive theories about how we respond and remember, and covering everything from the effect of 70 mm. film on Kenneth Branagh’s version to Michael Almereyda’s ambiguities.”—Studies in English Literature, 1500–1900
or
Buy Here
Copyright © 2020 American Booksellers Association