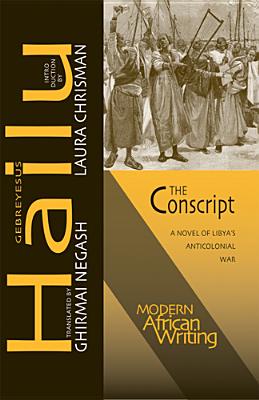 Eloquent and thought-provoking, this classic novel by the Eritrean novelist Gebreyesus Hailu, written in Tigrinya in 1927 and published in 1950, is one of the earliest novels written in an African language and will have a major impact on the reception and critical appraisal of African literature.

The Conscript depicts, with irony and controlled anger, the staggering experiences of the Eritrean ascari, soldiers conscripted to fight in Libya by the Italian colonial army against the nationalist Libyan forces fighting for their freedom from Italy’s colonial rule. Anticipating midcentury thinkers Frantz Fanon and Aimé Césaire, Hailu paints a devastating portrait of Italian colonialism. Some of the most poignant passages of the novel include the awakening of the novel’s hero, Tuquabo, to his ironic predicament of being both under colonial rule and the instrument of suppressing the colonized Libyans.

The novel’s remarkable descriptions of the battlefield awe the reader with mesmerizing images, both disturbing and tender, of the Libyan landscape—with its vast desert sands, oases, horsemen, foot soldiers, and the brutalities of war—uncannily recalled in the satellite images that were brought to the homes of millions of viewers around the globe in 2011, during the country’s uprising against its former leader, Colonel Gaddafi.

“Gebreyesus Hailu does Africa great service in recounting an all but forgotten and therefore all the more reprehensible chapter in African colonial history. In the same spirit, Ghirmai Negash’s superb translation brings back to world literature an Eritrean literary jewel of global and timeless relevance.”—Alemseged Tesfai, author of Two Weeks in the Trenches (2002)

“This translation from Tigrinya into English by Ghirmai Negash brings the slim, fascinating novel to a broad readership so that we might appreciate its value as a complex and moving reflection on Eritrean involvement in the Libyan anticolonial war. …The colonial encounter, as represented in Hailu’s novel, is messy and multifaceted, and this is, perhaps, the novel’s most important insight, one that could usefully be shared with students in African history or literature courses.”—Northeast African Studies

“The Conscript gives the Tigrinya novel its early framing contour, as it shows sophistication and maturity in the depiction of the inner turmoil and real-life characteristics of its characters. It is a novel that grapples with issues of identity, self-agency, war, and the traumatic effects of (de)colonization on the human psyche. Read it and see for yourself how canonical novels like Things Fall Apart, Weep Not, Child, Houseboy, The Bluest Eye, are eerily prefigured in an early African-language novel.”—Ali Jimale Ahmed, Professor and Chair, Department of Comparative Literature, Queens College, CUNY

“The Conscript is a harrowing journey into the experiences of an Eritrean man who, after being recruited into the Italian army, is forced to fight in its war to subjugate Libyans. This is a novel of great irony and power. Its translation into English is a gift to American readers.”—Laila Lalami, author of Hope and Other Dangerous Pursuits and Secret Son

“(N)ow another monumental achievement by Negash has dawned: one that will rewrite African literary history of the 20th century. He has translated The Conscript, a novel written in Tigrinya by Ghebreyesus Hailu, initially in 1927, and first published in 1950. The novel is remarkable, and its translation is momentous.”
— Warscapes.com

Gebreyesus Hailu (1906–1993) was a prominent and influential figure in the cultural and intellectual life of Eritrea during the Italian colonial period and in the post-Italian era in Africa. With a PhD in theology, he was vicar general of the Catholic Church in Eritrea and played several important roles in the Ethiopian government, including that of cultural attaché at the Ethiopian Embassy in Rome, member of the national academy of language, and advisor to the Ministry of Information of the Ethiopian government.