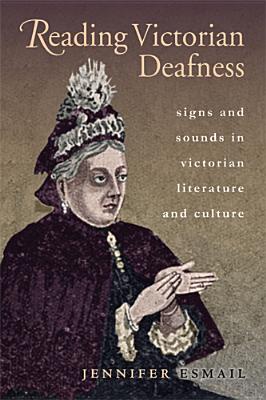 Winner of the 2013 Sonya Rudikoff Award for best first book in Victorian Studies
Short-listed for the 2013 British Society for Literature and Science Book Prize.

Reading Victorian Deafness is the first book to address the crucial role that deaf people, and their unique language of signs, played in Victorian culture. Drawing on a range of works, from fiction by Charles Dickens and Wilkie Collins, to poetry by deaf poets and life writing by deaf memoirists Harriet Martineau and John Kitto, to scientific treatises by Alexander Graham Bell and Francis Galton, Reading Victorian Deafness argues that deaf people’s language use was a public, influential, and contentious issue in Victorian Britain.

The Victorians understood signed languages in multiple, and often contradictory, ways: they were objects of fascination and revulsion, were of scientific import and literary interest, and were considered both a unique mode of human communication and a vestige of a bestial heritage. Over the course of the nineteenth century, deaf people were increasingly stripped of their linguistic and cultural rights by a widespread pedagogical and cultural movement known as “oralism,” comprising mainly hearing educators, physicians, and parents.

Engaging with a group of human beings who used signs instead of speech challenged the Victorian understanding of humans as “the speaking animal” and the widespread understanding of “language” as a product of the voice. It is here that Reading Victorian Deafness offers substantial contributions to the fields of Victorian studies and disability studies. This book expands current scholarly conversations around orality, textuality, and sound while demonstrating how understandings of disability contributed to Victorian constructions of normalcy. Reading Victorian Deafness argues that deaf people were used as material test subjects for the Victorian process of understanding human language and, by extension, the definition of the human.

Jennifer Esmail is a coordinator in the Centre for Community Partnerships at the University of Toronto. She formerly held the positions of assistant professor in the Department of English and Film Studies at Wilfrid Laurier University and postdoctoral fellow in the Department of English at Rutgers, the State University of New Jersey. She has published research on the representation of deafness and disability in Victorian literature and culture in ELH: English Literary History, Sign Language Studies, Victorian Poetry, and Victorian Review.

“Jennifer Esmail has written the definitive work on deafness and language in Victorian England. But beyond that she has contributed immeasurably to our understanding of the way that language, spoken and written, was understood in that era culturally, politically, and socially. Since language was so central to the Victorians, this book opens a window not only on deafness but the larger Victorian culture as well.”—Lennard Davis, Department of English, University of Illinois at Chicago

“[A] truly excellent, original book that deserves to be widely read… Reading Victorian Deafness is an astonishing contribution not only to disability studies but also to the many uses to which the shifting relations between sound and print were put in nineteenth-century literature and culture.” —SEL: Studies in English Literature, 1500-1900

“Appealing to a wide range of academic audiences, Esmail's monograph is an authoritative and thought-provoking study that encourages its readers to reconsider the significance of the spoken language in terms of what it means to be human.”—Literature & History

“(Reading Victorian Deafness) offers a richer demonstration of how Victorian deafness might make us think. As a truly comprehensive study of Victorian deafness, it incrementally expands the scope of disability studies theory and practice by clearly synthesizing disability studies with other subdisciplines, thus building innovative new frameworks for investigating the cultural history of the body.”—Review 19
or
Not Currently Available for Direct Purchase
Copyright © 2020 American Booksellers Association