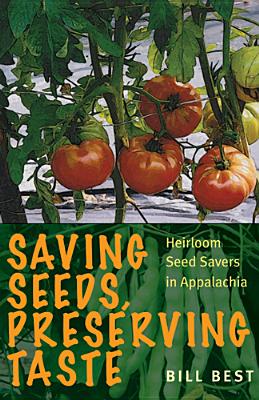 The Brown Goose, the White Case Knife, Ora’s Speckled Bean, Radiator Charlie’s Mortgage Lifter — these are just a few of the heirloom fruits and vegetables you’ll encounter in Bill Best’s remarkable history of seed saving and the people who preserve both unique flavors and the Appalachian culture associated with them. As one of the people at the forefront of seed saving and trading for over fifty years, Best has helped preserve numerous varieties of beans, tomatoes, corn, squashes, and other fruits and vegetables, along with the family stories and experiences that are a fundamental part of this world. While corporate agriculture privileges a few flavorless but hardy varieties of daily vegetables, seed savers have worked tirelessly to preserve genetic diversity and the flavors rooted in the Southern Appalachian Mountains — referred to by plant scientists as one of the vegetative wonders of the world.

Saving Seeds, Preserving Taste will introduce readers to the cultural traditions associated with seed saving, as well as the remarkable people who have used grafting practices and hand-by-hand trading to keep alive varieties that would otherwise have been lost. As local efforts to preserve heirloom seeds have become part of a growing national food movement, Appalachian seed savers play a crucial role in providing alternatives to large-scale agriculture and corporate food culture. Part flavor guide, part people’s history, Saving Seeds, Preserving Taste will introduce you to a world you’ve never known — or perhaps remind you of one you remember well from your childhood.

“In this simple paperback I've learned more about beans and their evolution at the hands of American farmers than anything else I've read over the past 35 years.”—Maureen Gilmer, “Yardsmart”, Charlotte Observer

“In Saving Seeds, Preserving Taste, Bill Best has captured in words his passion and dedication for perpetuating heirloom vegetable and fruit varieties in Appalachia. This has been his life’s work…. At seventy-nine, he continues to promote the saving of heirloom seeds, seeds that hold the potential for flavorful, nutritious food; seeds that if saved, can be grown year after year; seeds that hold a part of the history of Native American and Appalachian cultures.”—Journal of Appalachian Studies

“This animated narrative offers a glimpse into American folklore, migration patterns, and the glory of the family farm as it is known through its seeds, which live on season after season, offering distinctive local flavor.”—Publisher

“Saving Seeds, Preserving Taste is a practical and useful handbook for good garden husbandry but as it unfolds before your eyes, it reveals as well a vital world of southern Appalachian people, plants, food, and practice to nourish both body

Bill Best was a professor, coach, and administrator at Berea College for forty years, retiring in 2002. Since that time he has continued his seed saving and work with sustainable agriculture and for several years has been director of the Sustainable Mountain Agriculture Center located near Berea, Kentucky. The center makes heirloom seeds available to a wide regional audience and to the nation in general. In addition, through special arrangements, the center also ships seeds to many other countries.