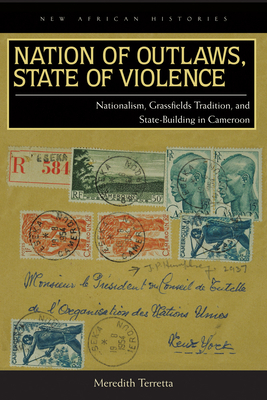 Nation of Outlaws, State of Violence

Nation of Outlaws, State of Violence is the first extensive history of Cameroonian nationalism to consider the global and local influences that shaped the movement within the French and British Cameroons and beyond. Drawing on the archives of the United Nations, France, Great Britain, Ghana, and Cameroon, as well as oral sources, Nation of Outlaws, State of Violence chronicles the spread of the Union des populations du Cameroun (UPC) nationalist movement from the late 1940s into the first postcolonial decade. It shows how, in the French and British Cameroon territories administered as UN Trusteeships after the Second World War, notions of international human rights, the promise of Third World independence, Pan-African federation, and national citizenship blended with local political and spiritual practices that resurfaced as the period of European rule came to a close. After French and British administrators banned the party in the mid-1950s, UPC nationalists adopted violence as a revolutionary strategy. In the 1960s, the nationalist vision disintegrated. The postcolonial regime labeled UPC nationalists “outlaws” and rounded them up for imprisonment or execution as the state shifted to single-party rule in 1966.

Nation of Outlaws, State of Violence traces the connection between local and transregional politics in the age of Africa’s decolonization and the early decades of the Cold War. Rather than stop at official independence as most conventional histories of African nationalist movements do, this book considers postindependence events as crucial to the history of Cameroonian nationalism and to an understanding of the postcolonial government that came to power on 1 January 1960. While the history of the UPC is a story that ends with the party’s failure to gain access to political power with independence, it is also a story of the postcolonial state’s failure to become a nation.

“Meredith Terretta’s book constitutes a highly significant contribution to the historiography of Cameroon, West Africa, and African nationalism more generally.… In challenging conventional political and cultural understandings of Cameroonian nationalism and its chronological development, the [work] makes important theoretical contributions to the field … and serves as an important model for future studies of African nationalism.”—Elizabeth Schmidt, author of Cold War and Decolonization in Guinea, 1946–1958

“In following the paths of Cameroonian nationalists where they actually lead, Meredith Terretta’s study does a number of things that no previously published histories of Cameroon’s decolonization have done.”—African Studies Quarterly

“This book is a valuable contribution to the current effort to reframe and reinvigorate our understanding of the nationalist period in African history. … Scholars seeking to understand the character of African nationalism have in [it] a wealth of ideas about how better to capture its substance, complexity, and vitality.”—Histoire Sociale

“A well-researched addition to the growing literature on African nationalism(s)…. Terretta provides Cameroonians with a history that the country’s various postcolonial governments tried to hide.”—Africa Spectrum

“Terretta’s history of the anticolonial insurgency that bedeviled central Cameroon in the years immediately before and after independence in 1960 will likely become the standard English-language history of that important but obscure conflict.…Terretta indicates important parallels between the UPC and the Algerian Front de libération nationale while insisting on the significance of pan-African networks of freedom fighters…Highly recommended.”—Choice

Meredith Terretta is an associate professor of history at the University of Ottawa and the author of Petitioning for Our Rights, Fighting for Our Nation: The History of the Democratic Union of Cameroonian Women, 1949–1960.