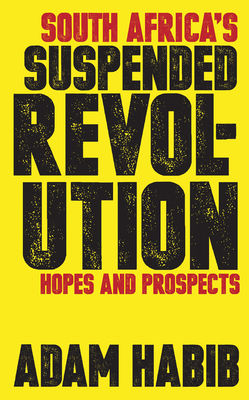 South Africa’s Suspended Revolution tells the story of South Africa’s democratic transition and the prospects for the country to develop a truly inclusive political system. Beginning with an account of the transition in the leadership of the African National Congress from Thabo Mbeki to Jacob Zuma, the book then broadens its lens to examine the relationship of South Africa’s political elite to its citizens. It also examines the evolution of economic and social policies through the democratic transition, as well as the development of a postapartheid business community and a foreign policy designed to re-engage South Africa with the world community.

Written by one of South Africa’s leading scholars and political commentators, the book combines historical and contemporary analysis with strategies for an alternative political agenda. Adam Habib connects the lessons of the South African experience with theories of democratic transition, social change, and conflict resolution. Political leaders, scholars, students, and activists will all find material here to deepen their understanding of the challenges and opportunities of contemporary South Africa.

“This is a readable, well-informed and perceptive account of the political economy of contemporary South Africa. Although he is clear-eyed about the inequality and poverty that mar the social terrain and the factionalism, corruption and greed that currently affect elite politics, Habib makes a case for specific forms of political leadership, for an active citizenry, and for the possibility of social pacts as paths towards an alternative political agenda.”—Colin Bundy, Honorary Fellow, Green Templeton College, University of Oxford

“Adam Habib is the right person to have undertaken the task that has issued in this book, which he describes as ‘a culmination of at least two decades of debates, reflections and thoughts about resistance in South Africa, its political and socio-economic evolution, and the conundrums and dilemmas relating to the making of this society.’ (p. ix) He has managed ‘to bridge academic and public discourse’ (p. x) while speaking truth to power.…Habib’s book offers a clear narrative, accessible academic analysis and a fair report on the state of the nation.”—African Studies Quarterly

“Adam Habib’s Suspended Revolution provides a ﬁrst-rate introduction to South African politics and it will be a point of reference for future debate. His approach is refreshing and his style is accessible to a range of audiences.”—The Journal of Modern African Studies

“[South Africa’s Suspended Revolution] offers a strong perspective, i.e. it is impatient and advocates change, and is not academically objective in the normal scholarly sense. However, it works very hard to achieve a balance, both in its source materials and in covering different schools of thought, and it works equally hard to be fair to key actors in the South African saga. It is, almost surprisingly, given its critique, hopeful — though clearly tempered.“—Stephan Chan, OBE, professor of international relations, School of Oriental and African Studies, University of London
or
Buy Here
Copyright © 2020 American Booksellers Association