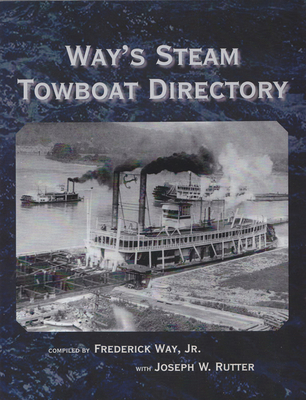 After the initial release in 1983 of Way’s Packet Directory, 1848–1983, the demand was enormous for a similar treatment of the steam towboats that once populated the Mississippi River System. Captain Frederick Way, Jr., aided by Joseph W. Rutter, gathered together this wealth of information concerning steamboats that shoved river barges laden with coal, petroleum products, chemicals, sand, gravel, and similar bulk commodities from the headwaters of the Ohio River to the jetties of the Mississippi.

The steam towboats that performed these services have completely disappeared from the scene, their places having been taken by hundreds of modern diesel-propeller towboats, but this thorough and remarkable reference guide helps preserve their history.

Captain Frederick Way, Jr., was born in Sewickley, Pennsylvania, in 1902, and grew up in the adjacent village of Edgeworth near the Ohio River. Early on, he became fascinated with steamboats, and particularly with the freight-passenger packets still prominent on the river in the early 1900s. While he was attending the University of Cincinnati, the ?“call of the river” caused Fred Way to leave after one year to take up the life of a riverman, and from 1925 until 1932 he operated the packet Betsy Ann between Pittsburgh and Cincinnati, becoming a licensed pilot and master. In the early months of the Great Depression, he lost his boat, and shortly after he began to write the story of the seven-year struggle to operate a packetboat in Log of the Betsy Ann, the first of his many publications. Captain Way was also the originator and publisher for thirty-two years of the Inland River Record, an annual compilation of boats operating on inland waters. And in 1983 he compiled Way’s Packet Directory, 1848–1983: Passenger Steamboats of the Mississippi River System since the Advent of Photography in Mid-Continent America (Ohio University Press), one of the seven books he wrote on American rivers and the history of steamboats and their crews, and subsequently revised with a new foreword by Joseph W. Rutter.

From 1941 until his death, Captain Way was president of the Sons & Daughters of Pioneer Rivermen, an ongoing association dedicated to preserving the history of Western rivers. Captain Way died at his home in Marietta, Ohio, in October 1992.

Joseph W. Rutter is the son-in-law of Captain Way and also a past president and chairman of the Board of Governors for the Sons & Daughters of Pioneer Rivermen. He lives in Marietta, Ohio.
Loading...
or
Not Currently Available for Direct Purchase