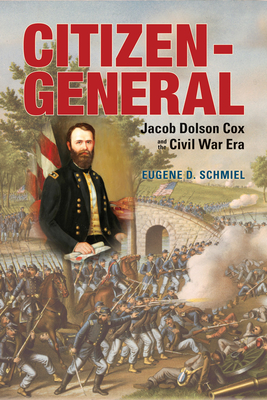 The wrenching events of the Civil War transformed not only the United States but also the men unexpectedly called on to lead their fellow citizens in this first modern example of total war. Jacob Dolson Cox, a former divinity student with no formal military training, was among those who rose to the challenge. In a conflict in which “political generals” often proved less than competent, Cox, the consummate citizen general, emerged as one of the best commanders in the Union army.

During his school days at Oberlin College, no one could have predicted that the intellectual, reserved, and bookish Cox possessed what he called in his writings the “military aptitude” to lead men effectively in war. His military career included helping secure West Virginia for the Union; jointly commanding the left wing of the Union army at the critical Battle of Antietam; breaking the Confederate supply line and thereby precipitating the fall of Atlanta; and holding the defensive line at the Battle of Franklin, a Union victory that effectively ended the Confederate threat in the West.

At a time when there were few professional schools other than West Point, the self-made man was the standard for success; true to that mode, Cox fashioned himself into a Renaissance man. In each of his vocations and avocations—general, governor, cabinet secretary, university president, law school dean, railroad president, historian, and scientist—he was recognized as a leader. Cox’s greatest fame, however, came to him as the foremost participant historian of the Civil War. His accounts of the conflict are to this day cited by serious scholars and serve as a foundation for the interpretation of many aspects of the war.

Eugene D. Schmiel is a retired U.S. Department of State Foreign Service officer. He was an assistant professor of history at St. Francis University (PA) and has taught at Marymount, Shenandoah, and Penn State universities. He holds the Ph.D. degree from The Ohio State University and coauthored, with his wife Kathryn, a book on life in the Foreign Service.

“This is a comprehensive biography of … a very important figure, not only in Civil War military history but also in political and religious matters. This book makes a significant contribution by relating in a thoughtful, analytical way the life and career of one of the most important Ohioans of that era. The author has clearly done his homework, and the text is not only well researched but very polished.”
— Steven E. Woodworth, professor of history, Texas Christian University, and author of several books on the Civil War among them, This Great Struggle: America’s Civil War

“Lawyer, soldier, governor, businessman, historian, scientist, law school dean, university president, statesman, Jacob D. Cox helped win the war for the Union and shaped the nation in the decades after. I was particularly delighted with Gene Schmiel's account of Cox the Historian. He does a superb job in unraveling the tangled literary debates and personal quarrels of the veterans who fought the war. Gene Schmiel is to be applauded for this perceptive and authoritative account of an extraordinary American.”
— Donald B. Connelly, Professor, US Army Command & General Staff College

“Jacob Cox may be the most intriguing character from the Civil War era that most Americans have never heard of. In Citizen-General, Eugene D. Schmiel captures his achievements and his contradictions, allowing us to see Cox as a key figure in a convulsive moment of American history.”
— Nicholas Guyatt, University of York, author of Providence and the Invention of the United States

“Jacob Cox was not just a significant figure in the Civil War and the writing of its history, but an important player in postwar politics as well. In Citizen-General, Eugene D. Schmiel provides an account of Cox's life and career, and the forces that shaped them, that is informative, impressively researched, and consistently interesting. This is a book that will appeal to anyone with an interest in the Civil War and its aftermath.”
— Ethan S. Rafuse, author of McClellan's War

“Jacob Dolson Cox played a major role in a number of different campaigns of the Civil War, including command of the 9th Corps at the Battle of Antietam. His military service—and his career as a politician—have long cried out for a full-length biographical treatment. Dr. Eugene Schmiel has rectified that oversight with his new biography of Cox. This well-researched, fair, and balanced treatment of Cox's life deserves a place on the bookshelf of anyone interested in the role played by political generals in the Civil War.”
— Eric J. Wittenberg