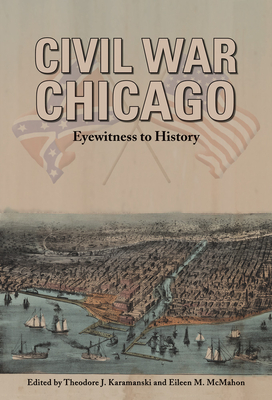 The American Civil War was a crucial event in the development of Chicago as the metropolis of the heartland. Not only did Chicagoans play an important role in the politics of the conflict, encouraging emancipation and promoting a “hard war” policy against Southern civilians, but they supported the troops materially through production of military supplies and foodstuffs as well as morally and spiritually through patriotic publications and songs. The Civil War transformed Chicago from a mere commercial center to an industrial power as well as the nation’s railroad hub and busiest port. The war also divided Chicago, however, between Lincoln supporters and Copperheads, whites and blacks, workers and owners, natives and newcomers.

The city played a key role in elevating Abraham Lincoln to the Republican presidential nomination in 1860, yet only four years later a Chicago politician’ s influence was key in declaring the war a failure and promoting a platform of peace with the Confederacy. Using seldom seen or newly uncovered sources, this book tells the story of the Civil War through the eyes of those who lived that history. Photographs throughout the book effectively convey the geography of events in this pivotal period of Chicago’s history, and the editors have provided a useful driving guide to Civil War sites in and around the city.

“A remarkable portrait of Chicago during the Civil War through the eyes of those who lived it.”—Ann Keating, co-editor of The Encyclopedia of Chicago and author of Rising Up from the Indian Country: The Battle of Fort Dearborn and the Birth of Chicago

“Compilations of primary sources are always a welcome addition to the Civil War bookshelf. These editors have dug deep and have provided a wealth of detailed accounts about the Civil War era in one of the most important cities in the United States. The introductory essays are informing and provide a good introduction to the primary text.”—Blue and Gray, Vol. 32, No. 1

“Ohio University Press's Civil War in the Great Interior series does fine work in presenting readers with all-embracing selections of published and unpublished Civil War documents on a state by state basis, the whole accompanied by expert editing. From the same publisher and similar in presentation style, Civil War Chicago: Eyewitness to History, edited by Theodore J. Karamanski and Eileen M. McMahon, narrows the documentary subject focus even further.…This is a really impressive documentary immersion project. With no shortage of Midwestern candidates, perhaps Civil War Chicago can be the first title in a new city series.”—Civil War Books and Authors

“The Civil War was a pivotal period for Chicago and the American city. It ended with triumph of free labor, industrial capitalism, and urbanization. The documents collected and expertly interpreted in Civil War Chicago: Eyewitness to History tell the riveting story of the impact of war on the city that became the great Emporium of the West as told through the words of participants in the momentous events of the times. ”—Dominic A. Pacyga, author of Chicago: A Biography

“This book promises to be an outstanding contribution to the literature on the history of Chicago and its role in the Civil War. The editors have assembled a terrific collection of sources that document the economic rise of the Windy City in the mid-nineteenth century and reveal the ethnic, racial, and political themes that shaped the metropolis in this crucial period. This will become a ‘must read’ for anyone interested in Chicago’s past.”—Mark Hubbard, Eastern Illinois University, editor of Illinois’s War: The Civil War in Documents

Theodore J. Karamanski is a professor of history at Loyola University Chicago, where he founded and directs the Public History Program. He is the author of seven books, including Rally ’Round the Flag: Chicago and the Civil War, Schooner Passage: Sailing Ships and the Lake Michigan Frontier, and most recently Blackbird’s Song: Andrew J. Blackbird and the Odawa People.

Eileen M. McMahon is a professor of history at Lewis University. She holds a doctorate in history from Loyola University Chicago and is the author of What Parish Are You From: A Chicago Irish Community and Race Relations, coauthor of North Woods River: The St. Croix River in Upper Midwest History, and editor of the Journal of the Illinois State Historical Society.