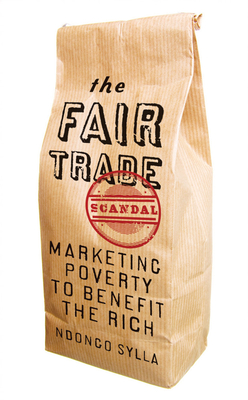 Marketing Poverty to Benefit the Rich

This critical account of the fair trade movement explores the vast gap between the rhetoric of fair trade and its practical results for poor countries, particularly those of Africa. In the Global North, fair trade often is described as a revolutionary tool for transforming the lives of millions across the globe. The growth in sales for fair trade products has been dramatic in recent years, but most of the benefit has accrued to the already wealthy merchandisers at the top of the value chain rather than to the poor producers at the bottom.

Ndongo Sylla has worked for Fairtrade International and offers an insider’s view of how fair trade improves—or doesn’t—the lot of the world’s poorest. His methodological framework first describes the hypotheses on which the fair trade movement is grounded before going on to examine critically the claims made by its proponents. By distinguishing local impact from global impact, Sylla exposes the inequity built into the system and the resulting misallocation of the fair trade premium paid by consumers. The Fair Trade Scandal is an empirically based critique of both fair trade and traditional free trade; it is the more important for exploring the problems of both from the perspective of the peoples of the Global South, the ostensible beneficiaries of the fair trade system.


Praise For The Fair Trade Scandal: Marketing Poverty to Benefit the Rich…

“…A meticulously argued exploration of the fair trade movement, its economic effects in both the Global North and South, and how it lives up to its own goals. The Fair Trade Scandal is not an attack on fair trade, but rather an attempt to draw out the contradictions of the movement by critiquing what its own protagonists claim the movement produces: namely, an alternative to neoliberal globalization.”—New Politics

“In The Fair Trade Scandal, Ndongo S. Sylla persuasively argues that Fair Trade perpetuates the free trade system to which it claims to present an alternative, thereby helping the rich marketing Fair Trade rather than the poor.…The book makes a compelling argument, and its credibility is bolstered by the author’s experience working for a prominent Fair Trade labeling organization.…Sylla provides a concise and approachable primer on and critique of Fair Trade.”—African Studies Quarterly

“I can only strongly recommend reading this book to all those who are unsure of whether the initiatives taken in recent years in favour of this ‘Fair Trade’ deserve to be supported or not. Ndongo Samba Sylla has given the answer to this question by conducting a very thorough research, an in-depth survey and a critical reading of the literature on the subject, which seems comprehensive. The result is, to my knowledge, the best book in this field.”—Samir Amin, author of The People’s Spring: The Future of the Arab Revolution and other works

“According to Mr Sylla’s calculations, for each dollar paid by an American consumer for a fair-trade product, only three cents more are transferred to the country it came from than for the unlabelled alternative…. It is hard to dispute his conclusion that, so far, the fair-trade labelling movement has been more about easing consciences in rich countries than making serious inroads into poverty in the developing world. After reading his book, the next cup of fair-trade coffee will not taste quite so good.”—The Economist

Ndongo Sylla is a Senegalese researcher for the Rosa Luxemburg Foundation and holds a Ph.D. in development economics.