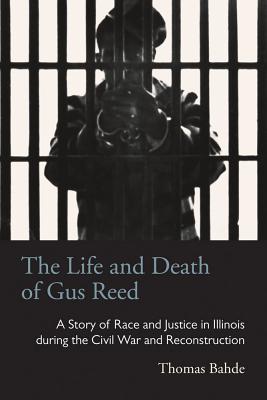 The Life and Death of Gus Reed

Gus Reed was a freed slave who traveled north as Sherman’s March was sweeping through Georgia in 1864. His journey ended in Springfield, Illinois, a city undergoing fundamental changes as its white citizens struggled to understand the political, legal, and cultural consequences of emancipation and black citizenship. Reed became known as a petty thief, appearing time and again in the records of the state’s courts and prisons. In late 1877, he burglarized the home of a well-known Springfield attorney—and brother of Abraham Lincoln’s former law partner—a crime for which he was convicted and sentenced to the Illinois State Penitentiary.

Reed died at the penitentiary in 1878, shackled to the door of his cell for days with a gag strapped in his mouth. An investigation established that two guards were responsible for the prisoner’s death, but neither they nor the prison warden suffered any penalty. The guards were dismissed, the investigation was closed, and Reed was forgotten.

Gus Reed’s story connects the political and legal cultures of white supremacy, black migration and black communities, the Midwest’s experience with the Civil War and Reconstruction, and the resurgence of nationwide opposition to African American civil rights in the late nineteenth century. These experiences shaped a nation with deep and unresolved misgivings about race, as well as distinctive and conflicting ideas about justice and how to achieve it.


Praise For The Life and Death of Gus Reed: A Story of Race and Justice in Illinois during the Civil War and Reconstruction (Law Society & Politics in the Midwest)…

“Much of Reed’s biography remains conjectural, but Bahde does an excellent job of constructing the series of contextual landscapes that support his conjectures. …The Life and Death of Gus Reed contributes to the vein of recent historical scholarship that widens the geographic compass of Reconstruction beyond the South and lengthens its chronological scope beyond 1877. In emphasizing the unsettled state of race relations in the North as well as the South during the Gilded Age and Progressive Era, this historiography performs a valuable service.”—American Historical Review, Vol. 120, No. 5, 2015

“The Life and Death of Gus Reed is a major new interpretation of emancipation and Reconstruction. Bahde weaves together the details of an emblematic life into larger social, political, and legal themes. The result is an ambitious and novel design for a book on this period of history.”—Daniel W. Hamilton, author of The Limits of Sovereignty: Property Confiscation in the Union and the Confederacy during the Civil War

“Historians of African Americans and of emancipation will welcome The Life and Death of Gus Reed … Two themes signal new approaches in nineteenth-century American social history. First, Bahde offers a more intimate portrait of the ways in which everyday individuals experienced the American Civil War. In this study, such individuals included free blacks and runaway slaves, antislavery whites, pro-slavery whites, and all manner of Midwesterners who found themselves at a crossroads. … Second, Bahde challenges our assumptions about the history of criminalization and incarceration of African Americans in an age when our society now has no choice but to face the ghosts and demons of our own brand of raced justice.”—Journal of the American Civil War Era

“Bahde has mined a wealth of primary sources … which make The Life and Death of Gus Reed a valuable contribution to the growing literature on Reconstruction in the Midwest.”—H-War

Thomas Bahde teaches in the School of History, Philosophy, and Religion at Oregon State University. He has authored articles on the midwestern experience during the Civil War and is the editor of The Story of My Campaign: The Civil War Memoir of Captain Francis T. Moore, Second Illinois Cavalry.