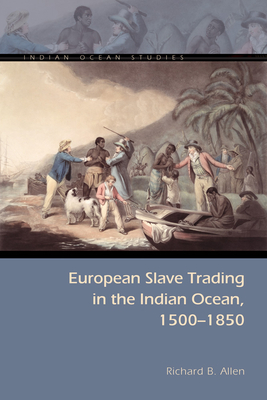 Between 1500 and 1850, European traders shipped hundreds of thousands of African, Indian, Malagasy, and Southeast Asian slaves to ports throughout the Indian Ocean world. The activities of the British, Dutch, French, and Portuguese traders who operated in the Indian Ocean demonstrate that European slave trading was not confined largely to the Atlantic but must now be viewed as a truly global phenomenon. European slave trading and abolitionism in the Indian Ocean also led to the development of an increasingly integrated movement of slave, convict, and indentured labor during the late eighteenth and early nineteenth centuries, the consequences of which resonated well into the twentieth century.

Richard B. Allen’s magisterial work dramatically expands our understanding of the movement of free and forced labor around the world. Drawing upon extensive archival research and a thorough command of published scholarship, Allen challenges the modern tendency to view the Indian and Atlantic oceans as self-contained units of historical analysis and the attendant failure to understand the ways in which the Indian Ocean and Atlantic worlds have interacted with one another. In so doing, he offers tantalizing new insights into the origins and dynamics of global labor migration in the modern world.

“Richard Allen seeks to do for the Indian Ocean what Philip Curtin did in his census of the Atlantic slave trade forty-five years ago: to produce an estimation of the scale and geography of European slave trading activity beyond the Cape in the three centuries after 1500.”—David Richardson, coauthor of Atlas of the Transatlantic Slave Trade

“The importance of this field of studies has finally been recognized: the new Indian Ocean Studies Series… represents a strong move towards new studies on people with no voice, of new inter- and intra-disciplinary reconstructions and interpretations of a still under-researched area.”—Canadian Journal of African Studies

“This study, the resulting accomplishment of both thorough archival research and expert synthesisof existing scholarship, is a welcomed addition to the historiographies of the Indian Ocean, thehistory of slavery and abolitionism, and oceanic history more generally… This study is bothaccessible to the interested layperson and handy for an undergraduate student, graduate student,or even professional historian looking for an orientation within the field.”—The Middle Ground Journal

“[Allen’s] book serves to open the route and will be indispensable to future research.”—Outre-mers: Revue d’histoire

“A rich and complex account … saturated with tantalizing historical detail … an essential source for students in slavery studies and scholars exploring research voids beyond the Atlantic slave trade. It challenges the status quo and nudges scholars to consider the interconnected complexities of the Indian Ocean.”—Journal of Human Trafficking

Richard B. Allen is the author of Slaves, Freedmen, and Indentured Laborers in Colonial Mauritius and numerous articles on the social and economic history of Mauritius as well as slavery and indentured labor in the Indian Ocean and colonial plantation worlds.