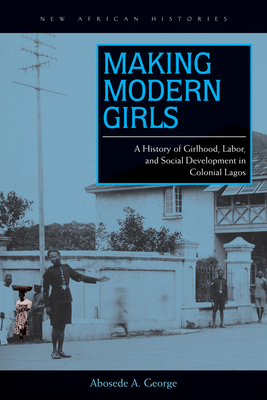 In Making Modern Girls, Abosede A. George examines the influence of African social reformers and the developmentalist colonial state on the practice and ideology of girlhood as well as its intersection with child labor in Lagos, Nigeria. It draws from gender studies, generational studies, labor history, and urban history to shed new light on the complex workings of African cities from the turn of the twentieth century through the nationalist era of the 1950s.

The two major schemes at the center of this study were the modernization project of elite Lagosian women and the salvationist project of British social workers. By approaching children and youth, specifically girl hawkers, as social actors and examining the ways in which local and colonial reformers worked upon young people, the book offers a critical new perspective on the uses of African children for the production and legitimization of national and international social development initiatives.

Making Modern Girls demonstrates how oral sources can be used to uncover the social history of informal or undocumented urban workers and to track transformations in practices of childhood over the course of decades. George revises conventional accounts of the history of development work in Africa by drawing close attention to the social welfare initiatives of late colonialism and by highlighting the roles that African women reformers played in promoting sociocultural changes within their own societies.

“One of the main planks on which this elegantly written book stands is the ideology of salvation as a political discourse and its deployment in the contestation over the notions of modern girlhood. The significance of Making Modern Girls in African studies is incontestable—it is by all standards one of the most sophisticated studies of girlhood in colonial Africa. George presents her carefully mined primary data in an engaging manner, rendering a first-rate analysis of the struggle about the ideas of modern girlhood by a spectrum of people (Nigerians and British).”—American Historical Review

“By profiling the experiences of working-class girls—namely girl hawkers and ‘those who set out to save them in nineteenth-century colonial Lagos’—[George] emphasizes children as colonial subjects and discusses how an examination of their interactions with the colonial state adds a new perspective to our understanding of European rule, citizenship building, and knowledge production in Africa. … Making Modern Girls has something to offer to all readers. … This work offers a deep perspective on the contours of modernity in colonial Africa, while presenting new insights into the links among gender, labor, and sexuality in colonial Africa.”—African Studies Review

“George approaches the history of girls and girlhood through the lens of labour, focusing on the constitutive relationship between gender, class, generation, and work. Because of the dearth of scholarship focusing on girls as historical subjects, the author had to determine the different types of work that girls performed in public spaces and how adults responded to their labour. … Making Modern Girls … makes a significant contribution to scholarly understandings of girls and girlhood in modern Africa. … It would be useful in a historical methods course to show how silences in the historical record can be read as sources in and of themselves.”—Canadian Journal of History

Abosede A. George is an assistant professor of history and Africana studies at Barnard College in New York City. She holds a Ph.D. from Stanford University, and her articles have appeared in such venues as the Journal of Social History and Women’s Studies Quarterly. She is the founder of the Ekopolitan Project, a digital archive of family history resources on migrant communities in nineteenth- and twentieth-century Lagos.