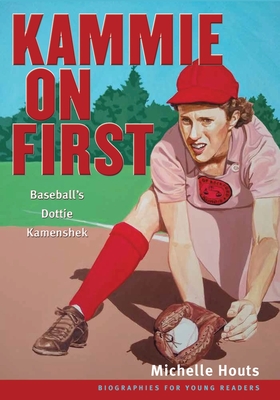 Dorothy Mary Kamenshek was born to immigrant parents in Norwood, Ohio. As a young girl, she played pickup games of sandlot baseball with neighborhood children; no one, however, would have suspected that at the age of seventeen she would become a star athlete at the national level.

The outbreak of World War II and the ensuing draft of able-bodied young men severely depleted the ranks of professional baseball players. In 1943, Philip K. Wrigley, owner of the Chicago Cubs, led the initiative to establish a new league—a women’s league—to fill the ballparks while the war ground on in Europe and the Pacific. Kamenshek was selected and assigned to the Rockford Peaches in their inaugural season and played first base for a total of ten years, becoming a seven-time All-Star and holder of two league batting titles. When injuries finally put an end to her playing days, she went on to a successful and much quieter career in physical therapy. Fame came again in 1992, when Geena Davis portrayed a player loosely based on Kamenshek in the hit movie A League of Their Own.

Kammie on First is a real-life tale that will entertain and inspire young readers, both girls and boys. It is the first book in a new series, Biographies for Young Readers, from Ohio University Press.

“Girls who love sports or baseball will appreciate this biography of Dorothy Kamenshek, a Cincinnati native famous for playing first base in the All-American Girls Professional Baseball League. … [It] This book allows fans to discover her true story and visualize it through interesting sidebars and historical photographs.”—The Toledo Blade

“This is a truly engaging account of the life and times of an exceptional woman athlete and the league which provided her the opportunity to play professional baseball—a dream held by many young girl softball and baseball enthusiasts, past and present.”—Merrie A. Fidler, author of The Origins and History of the All-American Girls Professional Baseball League

“When readers think back on sports news from 2014 and remember 13-year-old female pitcher Mo’ne Davis at the Little League Baseball World Series games, they will be pleased to come across this biography of a key female athlete…. This solid title could be used for reports and will fill a gap in biography collections.”—School Library Journal

“The very readable main text is supplemented with many sidebars on topics such as Kammie’s stats and the league’s contributions to the war effort. A solid choice for sports-minded girls and fans of the movie A League of Their Own.”—Booklist