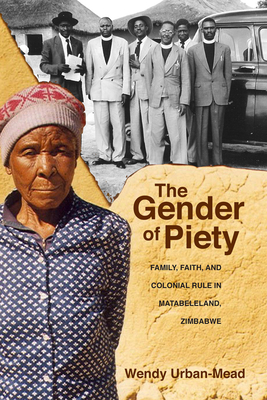 The Gender of Piety

The Gender of Piety is an intimate history of the Brethren in Christ Church in Zimbabwe, or BICC, as related through six individual life histories that extend from the early colonial years through the first decade after independence. Taken together, these six lives show how men and women of the BICC experienced and sequenced their piety in different ways. Women usually remained tied to the church throughout their lives, while men often had a more strained relationship with it. Church doctrine was not always flexible enough to accommodate expected masculine gender roles, particularly male membership in political and economic institutions or participation in important male communal practices.

The study is based on more than fifteen years of extensive oral history research supported by archival work in Zimbabwe, the United Kingdom, and the United States. The oral accounts make it clear, official versions to the contrary, that the church was led by spiritually powerful women and that maleness and mission-church notions of piety were often incompatible.

The life-history approach illustrates how the tension of gender roles both within and without the church manifested itself in sometimes unexpected ways: for example, how a single family could produce both a legendary woman pastor credited with mediating multiple miracles and a man—her son—who joined the armed wing of the Zimbabwe African People’s Union nationalist political party and fought in Zimbabwe’s liberation war in the 1970s. Investigating the lives of men and women in equal measure, The Gender of Piety uses a gendered interpretive lens to analyze the complex relationship between the church and broader social change in this region of southern Africa.


Praise For The Gender of Piety: Family, Faith, and Colonial Rule in Matabeleland, Zimbabwe…

“Urban-Mead uses African church-goers’ biographies from the early and mid-twentieth century to illuminate, fromthe inside, the environment of Zimbabwean nationalism in Matabeleland, its birthplace. A wonderful recovery of the lives of a forgotten and betrayed cohort of people.”—Paul S. Landau, author of Popular Politics in the History of South Africa, 1400 to 1948

“Urban-Mead should be commended for writing a book that challenges scholars to reconsider how they study and theorize about practices of faith in a social world.”—The Mennonite Quarterly Review

“Through close examination, Wendy Urban-Mead illuminates the gendered connections of individual women and men to the Brethren in Christ Church in Zimbabwe. The detailed biographies to reveal a pattern: proper female behavior intersected with church teachings, while men encountered difficulties in combining Ndebele masculine expectations with church ideology. The Gender of Piety is a major contribution to studies of family, church, and gender history in Africa.”—Kathleen Sheldon, UCLA Center for the Study of Women

Wendy Urban-Mead is an associate professor of history at the Master of Arts in Teaching Program at Bard College in upstate New York. She is coeditor of Social Sciences and Missions.